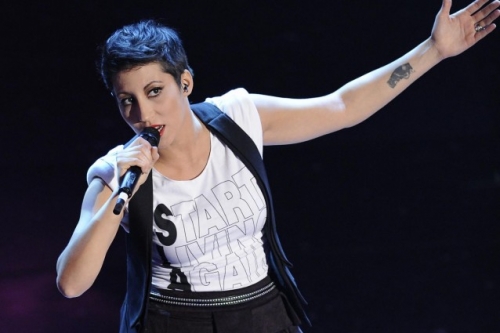 Italy, like many other countries in Western Europe, has been undergoing a radical transformation in the makeup of its population as foreign immigrants and displaced refugees have found throughout the Italian peninsula. This trend has had a profound effect on many aspects of Italian society, including religion, food, sports, family and last but not least, music. A shining example of this is Italian singer/songwriter Malika Ayane, who was born in Milan, on January 31, 1984. She is the daughter of an Italian mother and Moroccan father.

Ayane began her musical odyssey at age eleven as she was enrolled at the "Conservatorio Giuseppe Verdi" in Milan and studied violin theory and technique until 2001. During this time she was also a member of the "Coro di Voci Bianche", a children's ensemble at the world-renowned La Scala Theater. She was often times selected as the lead or solo vocalist and soon became a favorite of the several different orchestra directors. Her repertoire featured contemporary compositions by 20th century English composers Benjamin Britten and Ralph Vaughan Williams. Her instinctive curiosities lead her to experiment with other musical genres including rhythm and blues, jazz, soul and gospel.

In 2007, Ayane met legendary singer and producer Caterina Caselli who immediately recognized her unique singing style and signed her to a recording contract. Her debut recording "Malika Ayane" (2008) featured the writing contributions of Giuliano Sangiorgi (founder of Negramaro), Pacifico and legendary Italian jazz pianist Paolo Conte; who described her vocal qualities as "original and refreshing." The album achieved platinum status selling over 60,000 copies and paved the way for her debut appearance at the 2009 Sanremo Music Festival where she presented the smash hit "Come foglie"; which finished in third place in the "Giovani" (Newcomers) category. This song would find its way on the re-packaged version of her first album which yielded four hit singles. Later that year, she was also invited to participate in both the "Domani - Artisti Uniti per l'Abruzzo" and "Amiche per l'Abruzzo" productions that sought to raise awareness and funds for the victims of the April 2009 earthquake in the Italian province of L'Aquila.

Ayane displayed her songwriting skills by authoring the songs "Dopo per me" for emerging Italian vocalist, and future Sanremo champion, Valerio Scanu; as he participated in the "Amici" television talent show and "Ancora non sai" for Welsh classical-crossover soprano Katherine Jenkins. Her good fortune continued with the release of her second album "Grovigli" (2010) which received both popular and critical acclaim. Her first single "Ricomincio da qui", was presented at the 2010 Sanremo Festival, finished in fifth place and was deservedly awarded the prestigious "Premio della Critica" (Critic's Choice Award). Her cover version of Nicola Di Bari's "La prima cosa bella" was used as the title track in the soundtrack of this film which was directed by Paolo Virzì. The album sold over 100,000 units, was certified multi-platinum and featured the vocal talents of Cesare Cremonini and Paolo Conte.

Ayane's third and most recent recording, "Ricreazione" (2012) was the first to feature her as the exclusive producer and has so far yielded two hit singles "Tre cose" and "Il tempo non inganna." Musical collaborations include the writing talents of Paolo Conte, Pacifico, Tricarico and Sergio Endrigo. She chose to include full orchestral accompaniments with her songs in order to achieve a new tonality. The compositions are very conceptual in nature and feature very little over-dubbing so as to appear somewhat imperfect in sound and style. In the five months since its release, the album has been well received by both the critics and her legion fans. She is also scheduled to participate at the 2013 Sanremo Music Festival.