Moda', from obstacles to success 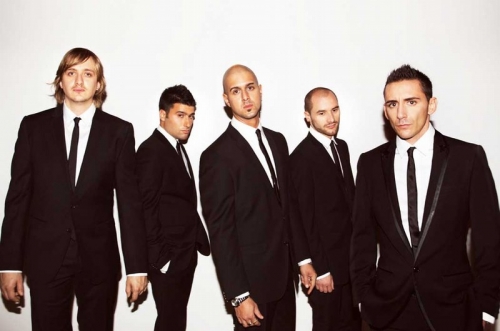 The seemingly "overnight" success of the Italian pop-rock group Modà has actually been fraught with turmoil and challenges along the way. The group was founded in Milan during the summer of 2002 by charismatic front man and singer/songwriter Francesco "Kekko" Silvestre. He began studying the piano at age five and completed his classical training by thirteen and focused his efforts on music composition.

By the spring of 2003, Kekko, along with Diego Arrigoni (guitarist), Stefano Forcella (bassist), Paolo Bovi (keyboardist), Matteo Alberti (guitarist) and Manuel Signoretto (drummer), published their first EP (extended play) recording at "Massive Art Studios" and was christened "Via d'uscita." The release contained six tracks that featured a raw but undeniably talented group and was marketed primarily throughout the region of Lombardia. The band then embarked on an exhaustive performance schedule in support of the recording and their efforts would not go unnoticed. After witnessing one of their live performances at the "Indian Saloon" nightclub in Milan, artistic director Marco Sfratato signed the group to a live performance on the RaiUno television program "Con tutto il cuore." Modà presented the upbeat composition "Ti amo veramente," a song which would find its way onto their first full-length album of the same name and be released in October of 2004 on their new label "New Music Productions."

The recording yielded four hit singles and enjoyed an extended stay on the Italian charts. Their live performances outgrew the small club venues and began filling the larger theatres throughout the entire peninsula. Their good fortune continued on into the New Year as they were invited to make their debut appearance at the 2005 Sanremo Music Festival. Competing in the "Giovani" category, their entry "Riesci a innamorarmi," received critical acclaim in spite of being eliminated in the finals.

At the end of the year, Modà signed on with a new record label, "Around the Music." Shortly thereafter, keyboardist Paolo Bovi decided to leave the band citing fatigue. Undeterred by the loss, they returned back to the studio and released a new single "Quello che non ti ho detto (Scusami...)," which was accompanied by a new video filmed in Verona. The song became an instant hit and was included on their second full-length album "Quello che non ti ho detto" (2006). Two more hit singles would be released and the band began touring as a quintet throughout the European continent for the remainder of the year.

With the future looking bright and having everything to look forward to, the ban returned to the studio to work on the third album. Yet during a recording session, band members Matteo Alberti and Manuela Signoretto, left abruptly citing creative differences with Kekko. Rather than fall into despair and disband the group, Kekko instead recruited new guitarist Enrico Zapparoli and percussionist Claudio Dirani to round out the lineup and the new incarnation of Modà eventually completed the recording which was entitled "Sala d'attesa" (2008). Two hit singles "Sarò sincero" and "Meschina" propelled the album to the top of the charts, acheiving gold status and becoming their best selling recording.

Easing up on their recording schedule, Modà would not return to the studio for nearly three years, spending most of their time on the road. Their most recent recording "Viva i romantici" (2011) became their landmark album, achieving "diamond" sales status of with over 600,000 units sold and yielded an amazing eight hit singles. A requisite return trip to the 2011 Sanremo Festival featured the band performing with upcoming female vocalist Emma Marrone and the duet "Arriverà" finished in second place behind winner Roberto Vecchioni.

Plans are underway for the release of their fifth album "Gioia" which has a target release date of early 2013.

Tweet
More in this category: « Negrita: The heart and soul of Italian alternative rock Jovanotti »