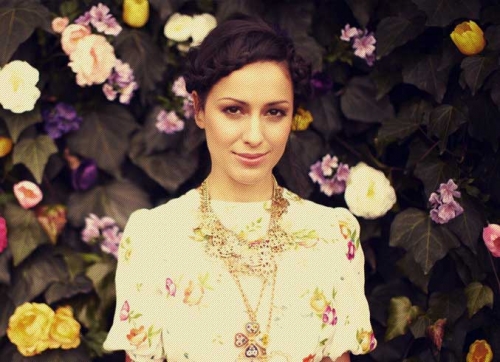 It is said that a child is a product of their environment as they begin to mature and grow. Cecilia Cipressi, better known as Syria, is no exception to this rule. She is an endowed singer, songwriter and actress who was raised in a musical family. Her father, Elio Cipri (Luciano Cipressi), is a noted producer who began his career with the Fonit Cetra music label as a singer in the 1960's.

She was exposed to music at an early age and consequently chose to pursue a musical education. During this time she would meet many other aspiring musicians and artists who would have a profound impact on her career development. Upon completing her studies she would meet renowned composer and lyricist Claudio Mattone who became enamored with her talents and agreed to take her under his tutelage.

Syria's professional career officially began with an appearance at the 1995 Sanremo Giovani music competition as she presented Loredana Bertè's 1975 summertime hit "Sei bellissima". The song finished in first place and secured her direct admission to the Sanremo Music Festival the following year. Syria competed in the Nuove Proposte (Emerging Artists category) and again captured first place with the lovely ballad "Non ci sto", written for her by Mattone. Later that year, these two songs would be included in her debut album "Non ci sto" on the "Easy Records" division of the RTI record label. The recording became a surprise hit and contained ten songs, including cover versions of Peppino Di Capri's "Piano piano dolce dolce and Mietta's "Sogno". She returned to Sanremo in 1997 and competed with other established artists in the "Big" category. Her entry "Sei tu" finished in third place and would find its way on her second release "L'angelo" which would go on to achieve gold status. Later that year, she and Carmen Consoli would both share the Italian television's "Telegatto" award as the "Artista rivelazione dell'anno" (Artist revelation of the year). Her good fortune continued as she would release her third album "Station wagon" (1998). The recording featured the songwriting talents of Gatto Panceri, Mariella Nava, Antonio Bungaro and Massimo Bubola and would yield three singles "Ho scritto una canzone per te", "Dimenticata" as well as the title track. A fourth song "Riflesso"; would be included in the Italian version of Disney's animated feature film "Mulan".

She began the new millennium by signing a new recording contract with the CGD division of Warner Music. Her fourth album "Come una goccia d'acqua" (2000) was produced by Biagio Antonacci and contained her first self-authored song "Maledetto il girono" as she shared the writing duties with upcoming female artist Marina Rei. The album's first single "Se t'amo o no" was the surprise hit of the summer. Syria returned to Sanremo in 1998 and presented the song "Fantasticamenteamore" which would be included on the 2001 re-release of "Come una goccia d'acqua". The album would go on to sell over 100,000 copies and achieve gold status.

Later that year she and her companion, Pierpaolo Peroni, producer of the Italian rock band 883, would welcome into the world their first child, a daughter named Alice. Surprisingly, Syria quickly returned to the studio after very little pause, to record her fifth album "Le mie favole" (2002). She assumed a greater role in both the songwriting and production duties of this recording and the release contained compositions by Max Pezzali, Gianna Nannini and Jovanotti.

She returned to Sanremo in 2003 and again surprised everyone by finishing in fifth place, among twenty entries, with the hit single "L'amore é". Her label chose to re-release "Le mie favole" in 2003 in order to include this song and a second new track entitled "Aria".

Syria elected to slow down her recording and performing schedule in order to dedicate more time to her family. It would not be until 2005 that she would release her sixth album "Non é peccato" on her new label, Atlantic Records. This recording featured the writing talents of Tiziano Ferro, Mario Venuti, Le Vibrazioni, Jovanotti and Giorgia. The album was another commercially successful release, achieving gold status and displayed a maturing artist who began to assume nearly complete creative control of her music.

In 2006, Syria chose to expand her horizons as she appeared in the theatrical productions of "Jovinelli varietà", written by Serena Dandini and "Chiamatemi Kowalski", written by Paolo Rossi. She returned to the studio in 2008 and released her seventh recording "Un'altra me" which featured the writing talents of several unknown independent songwriters. The results were not as she or her new label Epic had hoped for and her musical submission to the 2008 Sanremo Festival committee "Momenti" was not accepted for entry. Undaunted, she returned to Sanremo in 2009 as a guest vocalist, appearing with Dolcenera and performing on her song "Il mio amore unico", which would go on to become a big hit that summer.

Syria participated in the "Amiche per l'Abruzzo" benefit concert at Milan's San Siro stadium in June of that year. Her eighth recording was the 2010 EP (extended play) "Vivo amo esco", released under the stage name of "Airys" and which featured electronic hip-hop sounds. Her most recent album, "Scrivere al futuro" (2011), saw her return to the more familiar pop melodies that made her popular. The recording yielded two hit singles "Sbalzo di colore" and "Innamorarsi senza accorgersi".

For more information you can visit her website at www.syria.it.

Tweet
More in this category: « Gianluca Grignani (Driven by change and compelled by courage) Malika Ayane, a new face of Italian Music »