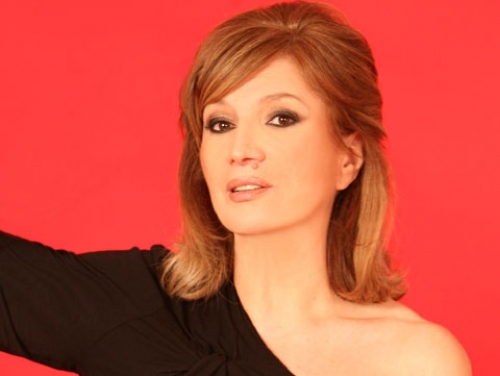 The exploits of Iva Zanicchi transcend not only the borders of Italy, but well beyond Europe to distant destinations across the globe. Iva was born in the municipality of Ligonchio (Reggio Emilia, Emilia-Romagna) on January 18, 1940. Her nickname is "L'aquila di Ligonchio" (The eagle of Ligonchio) and from a very early age she dedicated herself to her dream of becoming a singer.

Zanicchi has a powerful, soulful, mezzo-soprano voice that evokes comparisons to early American rhythm-and-blues music pioneers and her style reflects her uncompromising approach to both her music and career.

Iva appeared on the Italian music scene in 1961 as she competed in a local talent contest sponsored by the Gazzetta di Reggio newspaper and finished in first place. An encounter with legendary Italian singer and impresario Gianni Ravera in 1962 lead to her participating in the Castrocaro Music Festival, where she garnered notoriety and earned accolades for her interpretative skills.

She signed a recording contract with RiFi Studios Recording Company in 1963 and her breakthrough occurred the next year with the release of the smash single, "Come ti vorrei." The song, which sold over 400,000 units, was the Italian version of Solomon Burke's hit "Cry to me" and appeared on her first full-length album, Iva Zanicchi (1965). Also included on the recording was the single "I tuoi anni più belli," which she presented at the Sanremo Music Festival earlier that year, making her first appearance at the prestigious annual musical event.

Iva was especially busy in 1966 as she returned to Sanremo and presented the song "La notte dell'addio." She also made appearances at the Festival di Napoli and Disco per l'estate music competitions. Iva ascended to the pinnacle of the Italian music scene the following year as she, along with Claudio Villa, captured first place at Sanremo with the memorable ballad "Non pensare a me." In July, she married Tonino Ansoldi, who was the heir to the RiFi Studios Recording Company and their only child, Michela was born the next year.

Iva then returned to the studio to release her final two albums of the decade, Fra noi (1967) and Unchained Melody (1969). Popular American songs such as "River Deep, Mountain High," "Unchained Melody," "Love Me Tender" and "My Foolish Heart" were translated into "Ci amiamo troppo," "Senza catene," "Dolcemente" and "Estasi d'amore" and became instant hits. She returned to Sanremo in 1969, and along with Bobby Solo, captured first place with the stirring melody "Zingara."

Iva began the new decade by broadening her repertoire to now include the songwriting skills of Europe's leading composers. In 1971, Greek composer Mikis Theodorakis provided the lyrics for her album Caro Theodorakisâ¦Iva and she re-interpreted the works of legendary French singer Charles Aznavour on the album Caro Aznavour. Courageously, she also took on the formidable challenge of recording an album of popular Jewish folk songs on her release Shalom.

Iva embarked on a successful tour of Canada and the United States in February of 1973, highlighted by a show in New York's Madison Square Garden. Her third and final first-place victory at Sanremo took place in 1974, as she presented the song "Ciao cara come stai?" In total, Iva released 14 albums during the Seventies, including a Christmas-themed, Neapolitan and Spanish language recordings. The beautiful Zanicchi capped off a busy decade by appearing in the Italian version of Playboy magazine in January 1979.

The Eighties began as a turbulent period during her life as her husband's RiFi Studios Recording Company, which he had inherited upon the death of his father, faltered and went bankrupt. Iva was repeatedly changing labels as she signed with Traccia, Epic, SGM and Carosello record companies during this time. Nevertheless, buoyed by the success of her first Spanish language recording in 1974, Â¿Chao Iva cÃ³mo estÃ¡s?, she sought to capitalize on her popularity in Spain and Latin America and by recording no less than three Spanish-language albums during the decade and each was followed by successful supporting international tours.

Iva began spending less time in the studios and was instead becoming a more recognizable fixture on Italian television hosting variety, game and music telecasts. She chose to record fewer albums which now featured a new approach as she sought the songwriting skills of younger composers. She even underwent some minor cosmetic surgery in an attempt to appeal to a newer, younger market.

Remarkably, Iva became one of the first foreign female singers to perform in the U.S.S.R. as she traveled to numerous Soviet nations including Russia, Lithuania, Ukraine, Poland and East Germany during the summer of 1981. However, Iva's music career stalled in the Nineties as she would record only one album, the 1991 release Come mi vorrei, which featured a decidedly bluesy style, including interpretations of classics by Otis Redding, Barbara Streisand and the Bee Gees. An elaborate worldwide tour that included stops in Japan and Australia was her last journey outside the country as she seemed more intent on continuing her involvement with television and less interested in the rigors of recording and touring. She made appearances on the popular television comedy series Caterina e le sue figlie, which was broadcast in three parts in 2005, 2007 and most recently in 2010.

Iva began the new millennium by also choosing to involve herself with two new professions: politics and publishing. She was unsuccessful in her first attempt to run for public office in 2004. Four years later however, she succeeded in becoming a deputized member of the European parliament, representing the Forza Italia political party. In addition, she authored two books, the autobiographical Polenta di castagne (2001) and a romance novel, I prati di Sara (2005). Iva however still maintains a presence in the world of Italian music as evidenced by her last two recordings, Fossi un tango (2003) and Colori d'amore (2009), which were both certified gold and coincided with her two most recent appearances at Sanremo.