When in Rome: Go to Ostia Antica, Rome's Ancient Port 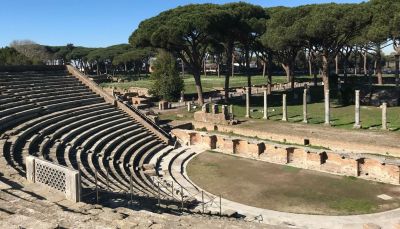 Going to Rome is like taking part in a living history lesson. Wherever you go, there are layers of evidence beneath your feet, or crumbling remains of former glory around every corner to remind you that here was a powerful civilized world when the rest of us were no more than tribal groups living in wooden huts.
For a sense of how it was to live in ancient Roman times, the best places are the remains of actual towns. Pompeii and Herculaneum spring to mind. But you can forget these sprawling acres of walls and streets besieged by tourists. Ostia Antica is where it really comes to life, where the town plan clearly shows a living, breathing community, well organized and prosperous.
For over 600 years, Ostia was the main port for Rome, and it was a thriving centre until the fifth century AD when malaria and commercial competition caused a gradual decline. The town is now three miles from the coast as a result of silting, but the positive side is that the buildings have been wonderfully preserved by the layers of silt.
With only a little bit of imagination, you can picture yourself living there, wandering down the main cobbled street, the Decumanus Maximus, and stopping to buy groceries and perhaps fresh fish, waiting in line standing on the black and white fish mosaics decorating the floor of the fishmonger’s.
You might stop at the little restaurant, the thermopolium, and lean on the counter to study the fresco menu and order your wine from the giant amphora.
The homes, shops and warehouses are all well-preserved. Most of the inhabitants lived in blocks of flats such as the House of Diana from the second century AD, with frescoed rooms several stories high, but you may be disappointed if you want to look inside. The entrances are padlocked and it is not clear when they will be open, although you may be allowed in if you are part of a guided tour. Similarly, the wonderful mosaic floors are not always on show, but protected by sheets of heavy plastic held down with stones.
The largest building was the Capitol, opposite the Forum. Another enormous building, the Basilica, was used for the administration of justice and to conduct business. It took the form of a spacious hall with a marble floor and marble columns. The podium with seats for judges is still visible.
The Museum in the centre is another large building which has been adapted to display some of the more precious artifacts found at the site, including frescoes, sarcophagi and statues. At present the museum is closed for restoration.
Walking along the main street with its large cobbles showing ruts where countless chariots have passed by, you cannot fail to be impressed by the tall brick-built archways which form the entrance to the theatre. It has been partially restored but gives a great impression of what it must have been like in Roman times, built for an audience of 4,000 people.
Climbing the steep steps you emerge at the top of a semi-circle of stepped seating, a theatre which is still used today for outdoor performances. There are fine views from here over much of the site. You may feel tempted to give a “Friends, Romans and countrymen, lend me your ears…” performance to test the acoustics, which are really rather impressive. Behind the stage area there is a row of three carved masks to indicate the role of drama here.
The streets are lined with baths, shops and warehouses (horrea) superbly preserved, with pediments and names inscribed in marble, such as the House of Cupid and Psyche with a courtyard and colorful marble floor. Most of these buildings have no roofs, and they have been skilfully preserved as “controlled ruins” by layers of cement along the tops of the walls, softening the outlines and making interesting, sculpted spaces.
The great thing about a visit to this site is that it is almost unknown. All you can hear is birds singing, and you may only come across a handful of tourists even if you stay all day. There are reasons for this. One is that until the 1970s it was only open one day a week, and very few people realized how well the port had been preserved by the Tiber’s mud.
The other reason for the lack of visitors has to do with accessibility. Most visitors staying in Rome will not have a car, and although there is a parking lot, they will not want the challenge of crazy Roman traffic. To get there takes a bit of ingenuity, and about an hour of your time, but it is worth it! Take the Metro Line B to EUR Magliana and change to a local train in the direction of C. Colombo, getting off at Ostia Antica station. (All this for the princely sum of €1.50!) From there it is a walk over a footbridge and along a tree-lined street before you arrive at the entrance.
Here is a final important piece of advice. Because it is not a major tourist destination, there is no shop or café, and the only toilets are at the entrance. Of course, with no shop there are no guidebooks or plans for sale, but there are very helpful explanatory notices throughout the site. There is a machine selling bottled water, but on my recent visit it was not working. Be sure to take drinks and possibly a picnic with you. There is a lot of walking, and you could easily be there all day. You will come away with the sense of having discovered an unknown archaeological gem, and if you do not have blisters on your feet after your day of discovery, you will feel elated (as well as exhausted) by what you have seen.
This article originally appeared in a different form in Italy Magazine.

View the embedded image gallery online at:
https://www.lagazzettaitaliana.com/travel/9964-when-in-rome-go-to-ostia-antica-rome-s-ancient-port#sigProIded49be437c
Tweet
More in this category: « The Spanish Quarter of Naples: Where Culture is Salvation Flying on a Budget to North Italy »