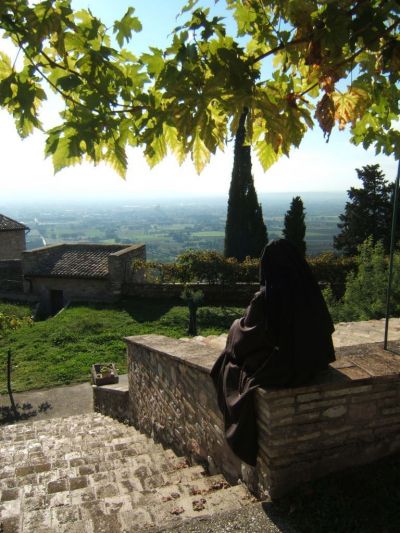 Ironically, just steps away from Assisi’s Museo della Memoria, 1943-1944 which recounts the story of the salvation of Jewish refugees in Assisi in WWII, you will pass the entrance to one of the convents where many of the Holocaust survivors were hidden, the Monastero di San Quirico.

In the 15th-century, the convent was built on the site of first-century Roman thermal baths for those Franciscan tertiaries (lay Franciscans) devoted to Blessed Angela da Foligno who had died in 1309. The mid-15th-century fresco over the entrance by Foligno artist Cristoforo di Giacomo depicts Saint Anne near her daughter, the Virgin Mary, nursing the Christ Child; an image called “la Madonna del Latte” (Madonna of Milk). Saint Anne wears red and the Virgin wears her traditional blue, both colors of nobility.

A “Madonna del Latte” image is not a frequent theme in medieval fresco art, especially over the entrance to a monastero, but the image might refer to the motherhouse of the tertiaries, Sant’Anna in Foligno, founded by the Blessed Angela da Foligno. The “Madonna del Latte” image is often found near fountains with water considered miraculous for the abundance of the maternal milk so necessary for infants – and here were the Roman baths, with spring water in abundance.

The Monastero di San Quirico is connected to another child, San Quirico, martyred with his mother in the 4th-century A.D. and revered as patron saint of children.

During WWII, thanks to the courageous decision of the Mother Superior, Madre Giuseppina Maria Biviglia, the cloistered Poor Clares (le Clarisse) cared for many needy children and adults. Many political and Jewish refugees hid in this convent named after San Quirico, the protector of children.

In 2013, Madre Giuseppina Maria Biviglia (1897-1991) of the Monastero di San Quirico was recognized by Yad Vashem in Israel as one of Assisi’s Righteous Among Nation. She wrote this account of events many years ago: “By the end of September (1943), the Anglo-American air offensive intensified and in our country, political persecutions, personal acts of revenge and hateful orders against the Jews and the Italian soldiers sympathetic to the Armistice, turned our convents evermore frequently into places of shelter for political figures, Jewish refugees and those escaping the concentration camps. Our convent played its part. Superfluous to say that we religious were simply not capable of understanding all that was happening in the midst of so much confusion. One simply obeyed the feelings which surfaced spontaneously every time we were presented with these unfortunate souls. Before the suffering of each, every attempt of judgement was silenced, even though we would have known how to put forth one judgement:  compassion would triumph…and it did triumph.  A triumph of love.”

Was Madre Giuseppina Biviglia ever fearful? In her words, “Sometimes I was a bit resistant to accepting these persons, feeling the full responsibility of my position before our community and fearful of a possible consequence – but in those moments, I was always encouraged by our Venerated Superior (Bishop Nicolini), by other priests and by my own consorelle (“co-sisters”) to act in favor of these poor souls.” And there were many. In one of her notes, she writes about the convent as having turned into an “arca di Noe” (“Noah’s ark”).

Hundreds were successfully hidden by the cloistered Poor Clares of San Quircio thanks to the underground tunnels and grottoes. These underground spaces often conserved documents and precious objects of those hidden in the convent. From the subterranean tunnels, they could exit into the convent garden.

Today, visitors can see the San Quirico gardens and the community of the Poor Clares whose convent once saved many refugees.