Terni: The “Love City” of Umbria 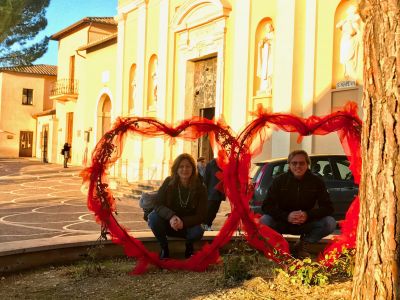 Just after Valentine’s Day last year, over 100 engaged couples, each woman holding a rose, celebrated their love in a church linked to Valentines, the Basilica di San Valentino, where the patron saint of Terni is buried. A pair of linked hearts in front of the 17th century church were frames for photos during the days following February 14, the feast of San Valentino.

The patron saint of Terni, the bishop Valentino was martyred in the third century. Legend recounts that Terni’s bishop is linked to “the day of love,” Valentine’s Day, for his courage uniting in marriage a pagan soldier of the Roman legion with a young Christian. Many an image of the Saint depicts him blessing the young couple as the young legionnaire presents a red rose to his love.

At the end of the fifth century, Pope Gelasio I wished to Christianize the Lupercalia, the ancient pagan rites on February 15 dedicated to Fauno, god of fertility. The pagan cult was abolished, and the Pope initiated a new feast, celebrating love between young people intending to marry and procreate, dedicated to San Valentino who was born on February 14, 176 A.D. in Terni.

Inside the Basilica di San Valentino, the altar over the Saint’s tomb was decorated with a hand-embroidered, cardinal-red cloth and flaming red anthurium bordered the base. Ternani and visitors from other areas paused before the Saint in prayer.

On February 15, the altar area became a stage as episodes of the life and martyrdom of San Valentino were re-enacted. An array of celebratory events in honor of the Saint animated the town of Terni from February 13 through the 16 as visitors wandered the wooden booths of the fiera (an outdoor market linked to a saint’s feast) encircling Piazza Europa.

All the goodness of Umbria was on stage. Vendors at the booths, many decorated with red hearts, offered tastes of their products with pride. Visitors could sip wines or artisanal beers, taste savory cheeses made with saffron, wild fennel, red onion, or shaved black truffle or bits of salami, coppa, dried sausages, or prosciutto. There were even gluten-free, heart-shaped sweets.

Not far from the fiera in a nearby cafeteria, an evening jazz concert took place; another event in the rich program of the three-day festival in Terre di San Valentino (“the lands of San Valentino”). A marathon, a poetry-reading, an array of children’s events, other musical events, guided visits to the Terni museums, cooking shows, cooking lessons, chocolate-tastings, and guided wine-tastings animated Terni.

The events of Terni during the festival of San Valentino mirror many festivals in Italy. Saints are celebrated, foods and wines are shared, music is enjoyed, and historical representations are held. Terni’s festival surely deems it the “Love City” of Italy.

Tweet
More in this category: « 52 Things to See and Do in Basilicata Molise: A Region of Special Beauty and Undiscovered Richness »