Japan Comes to the Veneto 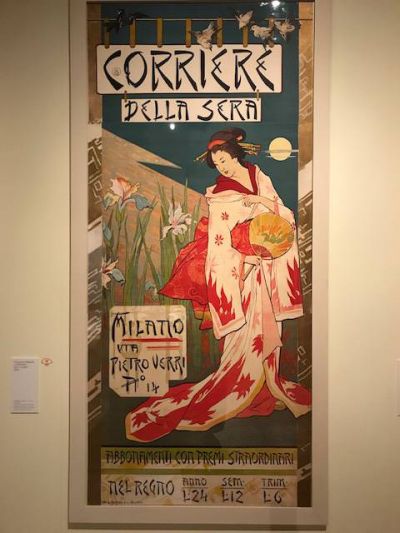 There's a small town south of Padua and an hour from Venice, off the beaten track but with plenty to attract the adventurous tourist, with its twin leaning towers, art nouveau houses and Renaissance buildings. This is Rovigo, a town in the heart of Italian rugby country, which is possibly why it is hosting an excellent exhibition of Japanese art in the Palazzo Roverella, to coincide with the Rugby World Cup.
As you walk down the main street, you can't fail to notice the hundreds of paper parasols hanging above you, punctuating the blue sky with dots of color. The Japanese decorations lead you to the doors of the palazzo where the exhibition is being held.
"Giapponismo: Oriental Influences on European Art 1860-1915" is a fascinating tour through the visual world of the turn of the century showcasing ceramics, clothing, furniture, woodcuts, posters, and, of course, paintings. The European fascination with Japanese art originally came from imports which were wrapped in colored woodcuts, in visual conventions nobody had previously seen and which became known as “The Floating World.” Many famous names such as Bonnard, Degas, Gauguin, De Nittis, and Van Gogh, absorbed these new influences into their work, and examples can be seen here alongside original Japanese prints.
Everyone is familiar with Hokusai's “Great Wave,” but there are many versions, all with a view of Mount Fuji. What I found even more fascinating was a small book full of his drawings with tiny figures on each page, intended to teach students about drawing human movement.
If I were to pick out other items at random, they would be a screen painted by Bonnard in the Japanese style or a vase decorated with life-like insects. The sumptuous textiles depicted in the clothes of the geishas must have had an enormous influence on the Impressionists. Think of Vuillard's patterned interiors, for instance.
It wouldn't have surprised me to find an exhibition of this caliber in London, Paris, Milan, or Rome. Finding it in Rovigo is astonishing, but at least you are guaranteed an uncrowded, beautiful space to view the objects at leisure and read the useful information provided (in Italian and English). The “Giapponismo” exhibition is open at Palazzo Roverella until January 26, 2020.