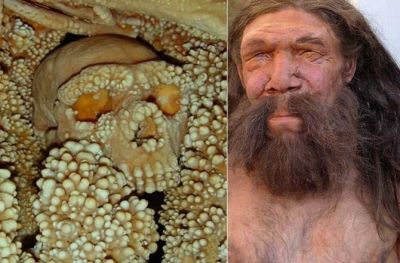 There is a limestone plateau in the city of Altamura in southeastern Italy in the province of Bari in the Puglia region. This is a territory known as the Alta Murgia. The limestone rock that is found here allows water to trickle through slowly, eroding the rock to form sinkholes leading to underground caves and rivers.

In 1991, a 33-foot-deep sinkhole was found in the Lamalunga Cave near Altamura and brought to the attention of the Altamura Center of Cave Research (C.A.R.S.). By 1993, speleologists had discovered “Altamura Man” in a 200-foot tunnel filled with stalactites and stalagmites within the sinkhole. The skeleton was found well-preserved, fossilized from calcification of the rock walls. All the bones were intact making it the most complete skeleton to be discovered in Europe. In 2009, researchers were able to date the skeleton from a fragment of its scapula along with analyses of its features. Their findings were published in the Journal of Human Evolution in 2015. Their research had determined that Altamura Man was a Neanderthal of Southern Europe between 128,000 and 187,000-years-old – making it the oldest Neanderthal DNA sample to ever be sequenced! Researchers theorized the man was around 35-years-old when he may have fallen into the hole, badly injured himself and starved to death. Although, another theory was that he may have died outside the cave and was washed into it by water. It is hoped that this discovery and the sequencing of the DNA will reveal new details about Neanderthal man and about the evolution of hominids in general.

Two Italian professors of Anthropology along with a pair of Dutch paleo-artists used all the DNA data, photogrammetry and laser scans to create a life-sized version of what Altamura Man looked like. The rendering is housed in the Laboratory of Paleoanthropology at the University of Rome La Sapienza.

The Lamalunga Cave is closed to the public for their safety as well as for the preservation of the fossils of the man and animals found therein. Nearby, is the Visitors Center and museum where they offer guided tours and an amazing video of the speleologists going down into the cave allowing visitors to view the fossils in situ. One can see Altamura Man’s skull, upside down, and his bones in a pile covered in coralloid formations. Other interesting artifacts may be viewed in the museum along with the equipment speleologists have used from the past to present day.

The next time you are in or near Altamura, stop by to say hello to its eldest inhabitant.

Tweet
More in this category: « Cefalu, Sicily Lispida: a Castle, a King and a Mermaid »