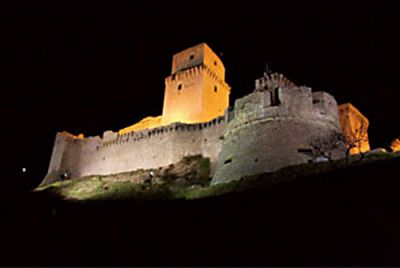 No, Madonna is not arriving in Assisi but La Madonna is – or so the children believe. As darkness creeps in on December 7 just before the vigil of the Feast of the Immaculate Conception on the 8th, the men of the Comunita Montana (Forestry Service) light a huge bonfire in front of the massive 14th-century Papal fortress, La Rocca Maggiore, towering over Assisi. The men roast sausages on the fire and offer them with hot mulled wine to the locals gathered around.

According to tradition, this bonfire lights the way for the angels who are flying to Mary’s home from Nazareth! In fact, during the night of December 7, La Madonna will stop at each Assisi home leaving a simple gift for the children. In the past (and in the 1970’s when we moved here and when Italy was still largely an agricultural economy), the gifts were only basic clothing needs such as socks, underwear or perhaps gloves. This practice lived in harmony with the saying (in Umbrian dialect) “Chi si rinnova per Maria, sgrampola da ogni malattia” (“whoever renews/replaces old clothes with new, for Maria, escapes all illnesses”). Our children used to wake up on December 8 to find new socks, underwear, a scarf, or gloves next to their pillows.

One year ago on December 8, our Giulia returned home from elementary school quite mystified by the new bicycle that one of her friends had received from la Madonna  “and not clothes as she should have, Mamma. I guess la Madonna made a mistake!” I remember the year I was in the U.S. on December 8 and called home. Our son Mattia, 16-years-old at the time, answered the phone and said, “Mom – la Madonna missed us this year. How come?!” Nowadays, la Madonna might bring an I-POD, a digital camera or a new cell phone to a child. More “Madonna mistakes?!”