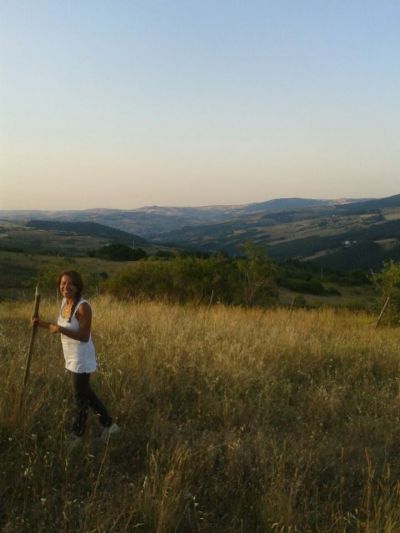 WWOOF (Worldwide Opportunities on Organic Farms) is a worldwide movement linking volunteers with organic farmers and growers to promote cultural and educational experiences based on trust and non-monetary exchange, thereby helping to build a sustainable, global community. As a volunteer, one lives alongside their host helping with daily tasks and experiencing life as a farmer. As a farmer, one hosts visitors who want to connect with the land and support the organic movement. It’s all about discovering new realities, meeting new people, experiencing different cultures, and being curious and sharing.

I guess it’s true that everything is relative. After this year’s wwoofing experience in Basilicata, my previous wwoofing experience, in retrospect, began looking better and better. This new experience taught me that even though each farm pledged themselves to the same high ideals, each, in their day-to-day workings, offered a totally different experience. After hearing that most of Italy’s small farms are organic, ecologically-minded and self-sustaining, I decided to find out what the Italian farmers could teach me, as I am an avid gardener and support sustainable ecology. I signed up for WWoofing Italia.

That first experience, three years ago, was on a farm that was owned by a man in his 40’s who wanted it to be totally self-sustaining, doing everything by hand with little machinery, no refrigeration, except for a freezer for meat, no stove or oven, hence we cooked by fire, and no tables or chairs, so we ate sitting on the floor outside on the porch. If I wanted coffee in the morning, I had to collect firewood in a nearby wooded area to build a fire to boil water for instant coffee.

Our host built everything on his own with the help of friends. There was a main house and two other structures, a woodworking shop and another for the processing of meat. The woodworking on these buildings was impeccable with beautiful windows and a very nice bathroom with electricity. We worked outdoors every day doing a variety of chores. We watered each plant individually with little cups from pails of water that came from a nearby water source trucked in in a very large plastic tank.  We gathered seeds for replanting and braided onions and garlic. There were goats and sheep that we took out to pasture twice a day; a variety of vegetables, fruit and olive trees, chickens, pigs, ducks, and bees for honey. He was also constructing a cave-like structure for processing cheese. It was a well-maintained farm that ran like clockwork. Our host did quite a bit of bartering, including trading honey for what he needed. And he got old bread from a friend. Old dried bread that he rehydrated in a bowl of water and then wrung out before eating. Let’s just say that he was a bit eccentric and this food source soon was crossed off my menu.

We were four wwoofers on this farm: a young couple from Brazil who spoke Portuguese and a little Italian and English, a younger man from Santa Cruz, CA who spoke no Italian whatsoever and carried a small English to Italian dictionary with him at all times, and me, an older Italian American woman from Los Angeles who spoke a little Italian because of my heritage. We slept on individual mattresses on the floor, and my roommate, because there were only two bedrooms, was the young man from Santa Cruz. Despite being put together randomly we all got along very well. When our host found out that I was a college professor he started calling me “Teacher,” so part of my job was to help him learn English while he helped me with Italian.

As part of the host’s wwoofing commitment to share cultural experiences, he took us to a local beach a couple times when it was too hot to work outside and one evening we went to a wood-fired pizza party at his friend’s farmhouse. Once, I drove the Brazilian wwoofers and myself to Potenza where, after days of sweaty hard labor, we sat in a bar with a cappuccino and a cornetta fantasizing about a normal life.

Since there were about 10 cats and one dog and all the other animals nearby, there were also hundreds of flies everywhere - on the food, on us, on everything. That is probably what I remember most about this experience, constantly swatting away flies. Except for one other incident when I got head-butted by Capone, the ram. His head, my butt. Down I went. Thank goodness the horns on a ram go backwards or that would have been my first experience being pinched by an Italian!

On a farm such as this there is too much work for one person. Hosting volunteer wwoofers allows for some progress to be made but even with the four of us, we could barely get the day-to-day farm work done, so getting ahead is very difficult for these solo farmers.

My friends thought I was crazy, at my age especially, for wwoofing and I have to admit, it was quite memorable, but at the urging of my sister, Joanna, who wanted to experience wwoofing first hand, I was about to do it again.

Fast-forward three years to September 2018. I had my WWOOF Italia membership card in hand and was ready to take on this wwoofing adventure, or so I thought! My sister Diana’s previous experience, my love of Italy, organic gardening and taking on a challenge led me to this. So we set off for our host’s farm in the Basilicata region of southern Italy from our family’s beautiful paese of Civitanova del Sannio in the region of Molise.

Our navigation sent us down a harrowing switchback mountain to a literal “end” of the road, a drop-off that led to nowhere. It was actually a sinkhole. After a circuitous route finally got us to our destination, we were unable to drive up to our place because the narrow roads in this particular part of town were never meant to accommodate modern cars. Unless you were driving a Fiat 500 or a motorbike you were out of luck. Be prepared for things like this!

Our sleeping accommodations were horrifying to this city girl and only a little less so to Diana, who is more accustomed to traveling to strange places. It seemed as if the previous wwoofers who stayed here over the years never thought to clean the place and instead left garbage, dirty laundry and artifacts from all over the world. Our room was in a building where, in Medieval times, the guests of the ruling family who resided in the castle across the way would stay. The incredible view from the highest point in town and the main church with its beautiful bells ringing throughout the day was quite a contrast to the inside of our living quarters right next door. And, the sound of the ringing church bells was a greater contrast to the daily early-morning whining chicken underneath our bedroom window. Every night I would tell Diana that we had to get out of this place and every night she would tell me to think of a good enough excuse. I had no idea that wwoofing hosts were not obligated to give us at least three-star accommodations. Diana had to remind me that this was all part of the wwoofing experience. Nevertheless, we slept with socks, long pants, long-sleeved shirts, and sweatshirts.

Our hosts, a husband and wife team, were friendly and welcoming with the high energy required to run this working farm and Agriturismo Bed and Breakfast with its constant flow of guests. He took care of the horses and other animals at another part of the farm down the road. She ran the B&B and the kitchen, which is where Diana and I would work the entire week.

Since this was September and the harvests were coming in, we were put to work washing, chopping and canning. One day, all day, standing at the sinks, we washed, cut and stuffed tomatoes in glass jars for canning.  When they ran out of jars after about 200, we were relieved.  But the next day brought more tomatoes and more jars and another full day of the same work. The third day, thankfully, there were only a few hundred tomatoes left, but then we were given plums for pitting! We washed, pitted and cooked what seemed like 1,000 prune plums prior to canning for jams and juices. Think Lucy and Ethel at the chocolate factory!
We also prepared lunch and dinner for the guests and for ourselves. Having been raised by Italians we already knew how to cook and clean and can so we weren’t learning anything new and weren’t too happy to be in the kitchen all day. There was so much work to be done on a daily basis and since we were staying off-site, our cena (dinner) wouldn’t come until 10-10:30 p.m. Breakfast was espresso and whatever else we could find to eat quickly before our work began.

One day we were surprised with an afternoon off and decided to visit the beautiful town of Pietrapertosa built on a rocky mountaintop. Here we would have wished to take flight with the angels on “Il Volo dell’Angelo,” a three-kilometer (nearly two mile) zip line down to another town, Castelmezzano. Unfortunately, it was closed that day so back to canning on the farm we went. We could only dream of flying away.

Another late afternoon, our host took us with her to the town of Potenza with its many shops and restaurants. On the drive home, she gave us a peak into her personal life: her beliefs and dreams, her transformation from depression to a deep spirituality and connection to God and her dream of having a community of farmers and others with which to share and barter goods. Our host endeared herself to us and so we began to feel completing our kitchen chores would be the only right thing to do. (Wwoofers are not, in fact, obligated to continue working if, for any reason, they do not want to continue.)

On our last day we were able to attend the Cancellara Salsiccia (sausage) Festival. Thousands of festivalgoers descended upon this sleepy little town to partake of the great food, drink and entertainment which went on into the wee hours of the morning as happens at Italian festivals. Now, this was a great way to end this adventure!

Our advice to anyone interested in the wwoofing experience would be to find out beforehand what type of work you will be doing and what sort of living accommodations you can expect so as not to be surprised as we were upon arrival. And of course, be flexible if you should need to make other arrangements. When our hosts left unexpectedly for a wedding in Rome, thus ending our commitment prematurely, we were able to book three nights in the town of Matera at the last minute. This pleasant surprise allowed us to turn one unusual adventure into more normal adventures in Italy as we traveled south. Well, maybe not that normal…. but that’s another story!

Tweet
More in this category: « Living Away from Italy is Much Closer Discovering the Island of Elba »