Discovering the Island of Elba 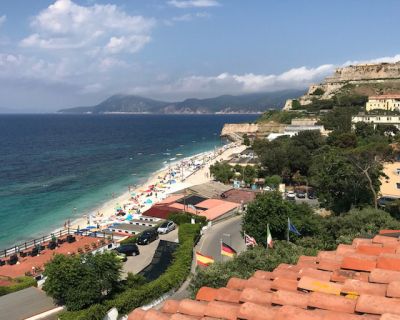 They say that the British have colonised Tuscany – going so far as to call it Chiantishire. But, there’s one part of Tuscany which, so far, has resisted a 21st century invasion by Inglesi and that’s the island of Elba. On a recent visit, although twice hearing a little bit of German, it was obviously a holiday destination for Italians, which makes it all the more authentic and charming.

Most visitors arrive by ferry from Piombino to Portoferraio, interestingly two place names which indicate the minerals (lead and iron) which gave rise to industries in the past. Piombino still bears the scars, an industrial carcass of an immense rusting steel works slowly collapsing into a gigantic tangle of pipes, gangways, conveyor belts, dented roofs, and bulging walls.

Portoferraio, on the other hand, as the ship rounds the headland to sail into the harbor, shows a pretty arrangement of apricot-colored buildings clustering in rows, each higher than the next, around the U-shaped marina, topped by an impressively solid-looking fort.

Probably Elba’s main claim to fame is the fact that Napoleon was exiled here in 1814. His elegant house and garden, Villa Mulino, can be visited after a punishing walk up Portoferraio’s steeply stepped alleyways. It’s quite a shock when climbing the hill to come across cars using these ridged lanes, once designed for horses, as roads. No wonder local cars look so battered.

Napoleon’s sister, Pauline, (who helped him to escape) shared with him another lovely home in nearby San Martino. This villa is much grander, with a sweeping drive and classical entrance (added later). It’s now a curious arrangement of one house on top of another. Below is the formal gallery and on top of its flat roof is the two-story original house which includes an Egyptian room to commemorate his military campaign.

Walking up the drive to the Villa San Martino you can’t help but notice an impressive brick art nouveau fantasy surrounded by palm trees. There’s a discreet sign at the entrance announcing that this is the Park Hotel Napoleone. This glamorous idiosyncratic hotel was once a convent, the head waiter told me when I asked about its history. He tapped the side of his nose with his finger. “The church was very rich in those days,” he said.

But there’s more to Elba than Napoleon. With its many attractive sandy beaches, it is an ideal place for a family holiday. The road which winds its way around the island’s coast provides another unspoilt bay round every bend – and there are lots of bends. The road reminds me of the terrifying drive along the Amalfi Coast.

The highest peak is Monte Capanne and at the village of Marciana you can take the Cabinovia, a kind of cable car, to its summit. Those who feel reckless enough can take a ride in a sort of metal basket painted yellow which holds two people standing up. The baskets dangle precariously over the wooded slopes to the summit where you’re rewarded with a magnificent view over the sea to Corsica.

You get a foretaste of this just getting to Marciana on a road with what feels like 100 hairpin bends with local traffic, buses and lorries hurtling around them alarmingly, giving the occasional toot at a blind corner. Marciana’s other claim to fame is rather more sedate but superb nonetheless. The Slow Food Osteria del Noce is reputed to be Elba’s finest restaurant and I’d have to agree. You climb the ancient stepped alleyways in a village which seems dead to the world then suddenly come across this famous osteria with a fine view and fine unusual fish dishes to match. Throughout summer, Marciana has an arts festival – all free – which aims to support local artists and crafts with displays in unused buildings and live open-air concerts.

Given Elba’s size, 17 by 11 miles, and mountainous topography, there is far too much traffic on its narrow roads. A road map of Elba looks as if a child has scribbled all over it. Every ferry adds another 60-100 cars, not to mention trucks and vans, and a boat arrives at least every hour. Signs in the Portoferraio bus station proclaim proudly that Elba is improving its public transport system to combat congestion. With the usual Italian excess of flowery language, it takes three paragraphs to tell you that the increased use of public transport will be better for the environment. Certainly, the buses are cheap and run on time, but if you want to find a quiet beach you’ll need a car despite very expensive petrol.

There are buses to Capoliveri though, without the usual terrifying climb, although it still sits on top of a hill. This is an inland town which depended originally on iron ore deposits giving rise to an important mining industry. These days the mine has been turned into a fascinating museum four miles out of the town. Nowadays, Capoliveri has the usual shops catering for tourists along its attractive narrow lanes, the only evidence of its industrial past being a sign over a shop and a collection of trucks and a crushing machine.

Perhaps now that Elba’s small airport has flights from a handful of Italian cities, holiday makers will no longer arrive in their own cars in such numbers. The challenge is to provide transport to where the tourists want to go. Most important, though, is to keep Elba exactly as it is: charming and utterly Italian.