The Magical Gardens of Valsanzibio 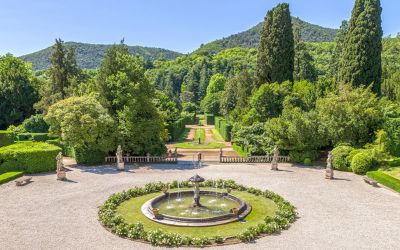 This was the challenge: to find somewhere to visit to escape the crowds of Venice. Not too far away, calm, beautiful, peaceful, and very Italian, but also fun for kids. Impossible, you might think, but no. I can recommend the very place.

The historic gardens of Villa Barbarigo at Valsanzibio, in the Euganean Hills less than an hour from Venice, are simply fabulous. The head of a Venetian noble family, Zuane Francesco Barbarigo had already lost his wife to the Black Death in 1631. He made a vow, praying for the rest of his family to be spared and in return, he would build a glorious monument to the glory of God. He commissioned a beautiful garden from a plan by Luigi Bernini (brother of the more famous Gian Lorenzo, the architect of St. Peter’s Square in Rome) and the layout has been beautifully restored by the present owners, the Pizzoni-Ardemani family. The restoration work is so perfect that on a recent visit I noticed several young people with scissors whose job it was to cut off the small yellowing leaves from the giant box hedges to keep the dark green surfaces in pristine condition.

So, imagine the typical Italian garden with lots of dramatic dark green trees and bushes to set off white marble statues; fountains and ponds to break up the vistas and shady paths to stroll along in the heat of summer. Add to those timeless ingredients a (very complicated) maze, an island for rabbits and water trick fountains and you have the perfect place for the whole family.

As you drive along towards the entrance, be prepared for one of those “oooh” moments when you pass the ornate baroque gateway dedicated to Diana, goddess of hunting. In the centre is the Barbarigo family’s coat of arms, a bearded mask (barba means beard). The statue of Diana is flanked by Actaeon and Endymion and her hunting dogs, whilst below, the sculptures represent the peasant folk. The complex design also features arches, columns, a broken pediment, and statues of Jupiter, Apollo, Mercury, and Hercules on the balustrade, all reflected in the pool in front of the gateway. This pool is all that is left of the canal which took the aristocratic owners 19 miles from their palazzo in Venice to this, their summer residence in the hills. Such was their importance that they made the journey by gondola to this gate, then were carried, still in the gondola, by servants up to the villa. The striped poles (paline) for attaching the family gondolas when not in use are still there.

The winding paths near the entrance are shady, full of the sound of thousands of tree crickets. You emerge into dazzling sunshine with a series of stepped pools decorated with grottoes, statues and fountains. There are not only large carp in the pools, but also turtles and black swans.

Avenues of tall boxwood lead off in every direction. In fact, this garden is unique in having the largest collection of evergreens, mainly buxus sempervirens, 60% of which are the originals planted when the gardens were first laid out from 1664 to 1669.

On the left of the Gran Viale, which bisects the park, is the maze. Parents beware! It is very easy to get lost; no joke in the height of summer when you walk miles along narrow pathways unable to see over the hedges. It is particularly galling when children find their way to the middle, a gazebo on a raised mound, where they can see you and give you either correct or unhelpful directions. Of course, children love it. These days there is a guide in the middle, looking down on all the maze explorers. On request, she will tell you how to escape, or get to the middle, but surely that’s cheating.

The garden is full of symbolism and the labyrinth, with its 1.5 km of paths, is no exception. All mazes symbolically represent a tortuous path leading towards perfection, but on this journey towards the ideal, the pilgrim must encounter the seven deadly sins of Greed, Gluttony, Wrath, Sloth, and Envy, which in the Barbarigo maze take the form of dead ends; or a vicious circle representing Pride, the worst sin of all.

On the other side of the main avenue is Rabbit Island. The rabbit is apparently a symbol of immanence, matters concerning the mind. Here is a small oval-shaped island with several ornate bird cages, surrounded by a moat of clear running water which presumably means that the rabbit inhabitants can’t escape. In the heat of the day they retreat into their burrows, but hop about happily when it’s cooler.

At the end of the Gran Viale is the lovely Villa Barbarigo with its faded pink façade. Unfortunately, it’s private and can’t be visited, but leading to it there is an avenue which suddenly becomes a row of fountains. These are the ‘water tricks.’ Nowadays, you just have to break an electronic beam to set them going, but 350 years ago a gardener controlled them at the touch of a button. Children delight in running through hoops of water after the first surprise.

Keen gardeners can pick up a leaflet which explains the planting and the rare trees. Other leaflets identify the most important of the 70 sculptures carved from Istrian stone which punctuate the gardens, some in groups, others in their own green garden rooms, like the Monument to Time. Or you can opt to sit in the former stables, enjoy a cool drink and look in the shop.

“Why haven’t I heard of these gardens before?” a friend who lives in nearby Vicenza asked me. “They’re magnificent.”

There you have it. A well-kept secret which makes a visit all the more enjoyable.

Myra Robinson’s amusing book about the area can be bought on Amazon Kindle or via her website.

Tweet
More in this category: « A Corner of the Caribbean at the Biennale "The" Gentleman of Verona »