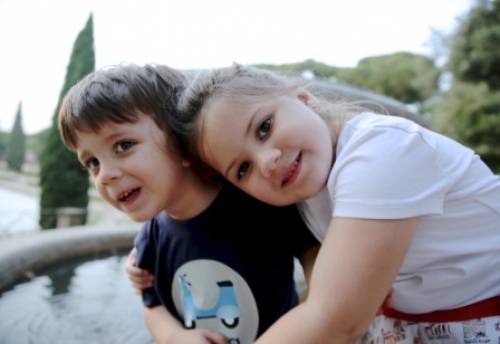 Any parent that has ever traveled with a small child knows the feeling. You’re walking through a crowded airport. You’re sweaty and flustered from security lines where you’ve taken off shoes, emptied your pockets, folded strollers, and dropped all the crayons from overloaded backpacks.

Just as you’re finally fully clothed again and making your way to your international gate, you get the feeling like you’re in a creepy movie. The Darth Vader theme song that’s playing in your head grows louder the closer you get to your gate. People glare at you. They’re hoping you won’t be on their flight. All eyes are on your precious cargo, their biggest nightmare — your children. A nine-hour flight with your kids…

I must admit, the anxiety of traveling to Italy last summer with our five-year-old daughter, Anna Cecilia, and two-year-old son, Luca, plagued me for months! My husband and I are avid travelers and were determined to instill that passion in our children at a young age. The will to do something, however, is different from actually doing it. But, when my dear cousin, Andrea, announced he was marrying in Rome, we decided it was the perfect opportunity to introduce our offspring to my Italian family.

The kids did beautifully on the plane. A good friend, who travels to New Zealand frequently, suggested taking a secret bag for each child. I filled the bags with new knick-knacks they hadn’t seen and it worked brilliantly. When they weren’t eating, watching movies or playing, they were sleeping—which made our entire cabin very happy!

Our first stop was Milan, a city where none of us had ever been. Our main strategy was to keep everyone awake the first day. We took two comfortable, compact umbrella strollers and decided to allow candy and gelato at any and all times throughout the day. Again, our children pleasantly surprised us by being major Milanese troopers!

We hit the ground running and spent the day exploring our surroundings. The Duomo and Galleria Vittorio Emanuele II were our first stops and perfect for kids to explore and run around. We realized how vital it was throughout the trip for our kids to become familiar with their environment. We stayed near the Duomo, in Milan, and by the time we left, they knew all the churches, gelato shops and toy stores in the vicinity.

Our toughest client was Luca. The time change and sightseeing made him a bit cranky and discombobulated. And, then, like a miracle sent from up above, we discovered the Milanese Tram, a transportation system dating back to 1881. We told Luca we’d be seeing the city on board a vintage train and, just like magic, his Italian obsession with modes of transportation began.

Our first stop on the Tram was the 15th-century Sforza Castle, a must-see for anyone traveling to Milan and a massive fortress in the eyes of a child. We serendipitously arrived on a Tuesday afternoon and found out that entrance to the castle is free Tuesdays after 2 p.m. The grounds are beautifully maintained and a great space for children to run around and release some energy.

We had a late lunch at the modern, hip Caffetteria Castelo Sforza and were even able to see some of the Castle’s many museums. As someone who works in the arts, I wasn’t able to thoroughly enjoy those museums as I would’ve liked, but at least we engaged the kids in some of the history. We were, after all, in a castle so vestiges of knights and princesses were present throughout!

Because we were traveling with my parents, the highlight for my husband and me was definitely getting an operatic date night to see “Tosca” at La Scala. The highlight for our kids was probably walking the streets, at all hours, and just becoming acquainted with the vigor and liveliness of a European city. Europeans really live outside and take advantage of the vitality of public spaces. Especially during the warmer months, piazzas are chock-full of street entertainers, pedestrians, food vendors, and music, so the kids were never bored and always felt like part of the party.

From Milan, we made our way to Rome. We used the fun transportation card once again, and bought tickets on the Frecciarossa, Italy’s equivalent to Amtrak’s Acela, only affordable and family-friendly. Not only does it have wonderful family ticket deals, but you can look online to find stroller compartments scattered throughout the trains and pick convenient seats.

Travel between Milan and Rome is less than three hours; not too long for the kids who, besides the window on the passing Italian countryside, looked forward to the train attendants who come by with food carts that have everything from sandwiches and chips to espresso and cookies.

I lived and worked in Rome during my 20’s, so I was in familiar territory and adore it, but I had never been there with children. Rome can be a chaotic and hectic city, so I was a bit hesitant about tackling it with little ones.

Fortunately, my Italian family was there to greet us upon our arrival in Rome’s Termini train station and the kids immediately felt at home.

We took them to our hotel and, again, familiarized them with their surroundings. And, it turned out, our hotel was a godsend. We decided to stay in one of Rome’s many residential areas and chose the Hotel Villa Glori in the Flaminio neighborhood. It was within two blocks of a major bus and tram line, so access to landmarks like Piazza del Popolo and Villa Borghese was nearby. But, still, we were in a quiet and quaint neighborhood, with tranquil surroundings that allowed for more outdoor play for the kids, affordable and family-friendly restaurants, and interaction with locals. Within an hour, we had located a same-day drycleaner, super market and playgrounds.

Especially with a historic city like Rome, people can become fanatical about hitting every single landmark. You simply won’t be able to do that with children. Our goal was to hit one major site per day and then indulge them in some pizza or pasta. We’d try to head back to the hotel for naps or playtime before baths and dinner plans. Our system worked relatively well despite inferno-like summer heat. We found the kids were at their best in the evenings, when the temperatures were more tolerable, hanging out in public, outdoor spaces. Our magic card with five-year-old Anna-Cecilia was the promise of buying her an Italian speaking Cicciobello doll. I had one as a child and was shocked to see commercials for it nearly 40 years later. In Italy, many Tabacchi shops sell toys and the mini-stores are scattered all over Rome. Searching for Cicciobello became a game for Anna-Cecilia and was a great excuse to get her to be excited about extended periods of sightseeing.

Because we didn’t have time for any small-town visits, my husband and I were adamant about fitting in a day-long excursion outside the city. The historic hilltown of Tivoli, less than one hour outside Rome, was perfect for our brood. We arrived around lunchtime and had a really nice outdoor meal at Reginella. From there, we headed to Villa d’Este where the kids frolicked among amazing statues and fountains. It was nice to get away from the stifling urban heat and enjoy an outdoor masterpiece overflowing with nymphs, grottoes and water.

We spent an entire afternoon of our trip at Villa Borghese, Rome’s equivalent of Central Park. You feel like you’ve stepped back in time when strolling around Villa Borghese and it truly is a child’s dream playground. Kids, and kids at heart, can rent boats, bicycles, Segway’s, and even rollerblades to whizz around Villa Borghese’s beautiful green trails.

We took a little train ride that went all over the park, including the Bioparco di Roma (Roman Zoo), and made stops at the two areas with carnival-like rides. If you go at the right day and time, you might even be able to catch a show by the San Carlino marionettes, a charming little theater on Viale dei Bambini that perform children's puppetry.

But our favorite memories are those with no strings attached, those spontaneous moments we had just walking around the Eternal City. It was amazing to see our children’s reactions when we’d turn a street corner and they’d see the Coliseum or Trevi Fountain right in front of them.

What truly made our trip so enjoyable, however, was the warmth of the Italian people and the acceptance of children in their society. Italians incorporate and embrace children as part of their culture and the feeling is palpable everywhere you go.

So, if you’re hesitant about traveling abroad with kids but are ready to take the plunge, Italy’s a great beginning.