What do Penelope Cruz, Ferrari and the Oldest Hotel in Italy Have in Common? 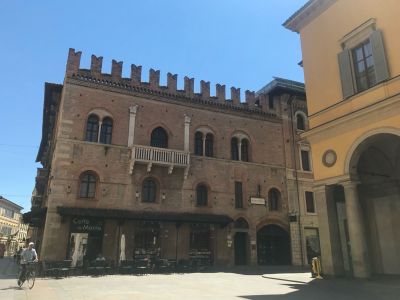 It often happens in Italy. You stop in a little, seemingly unremarkable town, and you discover somewhere charming and fascinating. So it was with my recent stay in Reggio Emilia.

For a start, you wouldn’t ever think that the oldest hotel in Italy could be here. The Hotel Posta, right in the center, was originally a 13th century building known as the Palazzo del Capitano del Popolo, but it has been a hotel for over 500 years and owned and run by the Sidoli `Terrachini family for the past century. The only time it has closed in its 500-year history as a hotel was twice during Covid lockdowns. Originally the Palazzo was the most important administrative building of the town, the home of the chieftain from 1281, and parts of the hotel now retain the frescoes, rafters and ancient hand-made windows from the 13th and 14th centuries, including an impressive baronial hall used for weddings, conferences etc., but the 38 bedrooms, all differently decorated, have all modern conveniences while still retaining the character, charm and antique furniture of a bygone age.

Signor Umberto Sidoli, the manager and owner, is an enthusiast who enjoys talking about his wonderful property. We spent an entertaining hour in the hotel’s quirky bar, furnished, as is the whole reception area, with the quasi rococo fittings from the Pasticceria Nazzani, which closed in 1930, and which was owned by his great-grandfather. The bar is dominated by an impressive, enormous brass coffee machine, no longer used, together with another strange machine perhaps for some kind of lotto, but nobody knows for sure.

The Este family relinquished the original building in 1516 when it became a hostelry known as the ‘Tavern of the Hat’, and stables and shops were added to the ground floor. Among the many documents which give glimpses into the early life of the hotel is a 1684 decree to control disorder by punishing drunkenness and prostitution or staying without a pass. Offenders were fined 25 gold coins and three lashes in public. I don’t know whether that law is still in force, but it’s not worth risking!

The Posta has flourished over its 500 plus years, currently with around 65 percent Italian guests, and many foreign tourists now coming for the whole package which includes trips into the country to visit the family’s farmhouse where they make balsamic vinegar and serve meals using their own produce.

Reggio Emilia is also the world center for the Malagussi Education Method. Ten thousand visitors a year arrive to study this approach for teaching young children, and will typically stay in the town, many at the Hotel Posta.

Signor Sidoli is optimistic about the hotel’s future. When I stayed there, (in August) the hotel was almost full again after fewer bookings following Covid. He talks about changes needed to attract more tourists, like abolishing the traditional half day closing (Thursdays) which is an anachronism in the days of mass travel. They’re adapting to many more last-minute bookings, and can offer garage parking.

The sleepy little town needs to publicise its assets, he says, like the fabulous Antica Salumerio Pancaldi, an atmospheric delicatessen which also serves local specialities at lunchtime. The Municipal Museum may not sound very exciting, but it is a quirky delight with its 18th century natural history collection. Stuffed flying fish hang from the ceiling, and stuffed lions attack stuffed zebras round every corner, not in glass cases, but approachable – shown by bald patches of fur where countless children have dared to stroke them. A huge bear menaces as you round the corner, pointing down the hall to displays of thousands of animals, birds and insects.

Reggio Emilia was the birthplace of the Italian flag in 1797, and there’s a small museum to commemorate it in the town hall.

There’s another extraordinary museum in Reggio which I didn’t get to see this time, but I will! Housed in a former lunatic asylum is the Museum of Psychiatry.

Of course, there’s a reason why the oldest hotel in Italy is here in Reggio, and that’s the Via Emilia, the Roman road which crosses the north of Italy and runs right through the middle of the town. Going for a stroll after breakfast in the hotel’s elegant art nouveau dining room, I turned the corner from the Hotel Posta and found myself on this very road. Even more amazing was what I encountered next. A little way along the street I saw a curious assemblage of vans, lorries, white drapes, cables, and cameras on rails. The Via Emilia was completely blocked. A trendy young woman with a clipboard warned me that I could go no further.

“Perche non?” I protested that the footpath was a public right of way. She informed me that they were making a film about the life of Enzo Ferrari on this very street, and that one apartment had been chosen because his original address in Modena wasn’t suitable and this looked exactly the same.

“You may like to know”, she continued confidentially, “that the film stars Penelope Cruz and Adam Driver and is directed by Michael Mann. Penelope and her husband, Javier Bardem have just spent their summer holiday here with the whole family.” Well, well! You never know what’s round the corner in Italy!

The chosen restaurant of the stars is Arte e Mestieri in the delightful courtyard behind the Max Mara shop on the Via Emilia. It has a terrific atmosphere, especially at night, and the food is excellent.

I was disappointed that I didn’t see the film stars, try as I might to peer through the windows of Apartment 22 where strong lights from the street were creating artificial daylight in the 19th century building. But look out for the film. You now have insider knowledge about the location that the credits won’t tell you.

View the embedded image gallery online at:
https://www.lagazzettaitaliana.com/travel/10102-what-do-penelope-cruz-ferrari-and-the-oldest-hotel-in-italy-have-in-common#sigProIde6bba8ea69
Tweet
More in this category: « A Piero della Francesca Masterpiece in Monterchi An Umbria January »