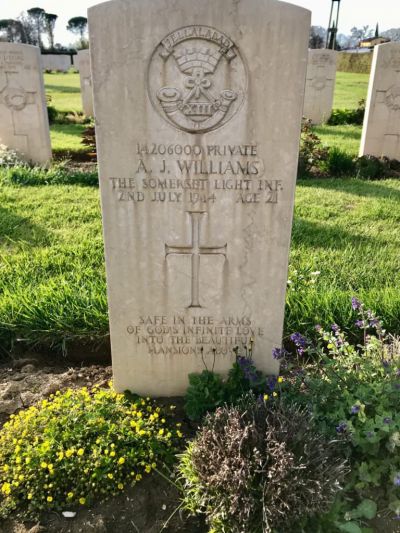 Assisi spreads out serenely on the hill backdropping the Assisi War Cemetery where over 900 white tombstones stand stalwartly in straight, evenly spaced rows; like the rows of the proud soldiers buried there who had once marched straight and tall, heads high, behind their commanders.

Initially known as the “British Empire Military Cemetery,” the Assisi War Cemetery was inaugurated in September 1944 when the battle for the liberation of Italy had moved north to the Gothic Line. Throughout the following year, casualties were brought here not only from Umbrian battlefields near Lake Trasimeno and along the Tiber River valley but also from some areas of neighboring Latium and Tuscany and from as far away as the regions of Emilia Romagna and Abruzzo.  Not all died on the battlefield. Some died in the field hospitals of Assisi and Perugia.

The town of Assisi was liberated on June 17, 1944 by the 1st Battalion of the Argyll and Sutherland Highlanders and the 8th Indian Infantry division of the British Indian Army who had worked their way north from the battlefield at Cassino. Five of their men were killed at that time and buried in the Assisi War Cemetery.

Of the 945 buried in the cemetery, 800 are from Great Britain, 40 were Canadians, 29 from New Zealand, 55 South Africans, 10 from India, 1 of the Pioneer Corps of South Africa, 4 from Allied nations, and 1 was never identified. Most were so very young.

The cemetery is in a serene corner of the Assisi valley where calm and peace pervade as soon as you enter the wrought iron gate. An afternoon here is calming, soothing, and heart-rending.

Each soldier’s tombstone bears the date of death and age, and many are inscribed with tributes from the young men’s families. The badge of the corps or company is also inscribed above each name.

On a visit here, I learned so much from two gardeners; full-time employees of the Commonwealth who care for this site with passionate dedication, grooming lovingly the earth around each tombstone as if it were that of a family member.

They pointed out to me – almost with pride – the Canadian flags placed before the tombstones of each Canadian soldier by Canadian teens on a recent group tour to Assisi. We talked at length about all the educational trips here organized by area schools.

In May 2019, eight Umbrian schools, elementary to secondary, participated in the project Pietre della Memoria (“Stones of Memory”) centered on censusing, cataloging, visually documenting and gathering documents related to the monuments, dedicatory plaques, and tombstones relative to both World Wars, producing videos and interviews as part of their research. Their project concluded with a ceremony at the Assisi War Cemetery where the Rivotorto band played in tribute, leading all through the cemetery entrance gate.

The students followed, all bringing flowers to place as homage before the tombstones. All gathered around the cross in the center for opening ceremonies and then the students headed to the tombs to leave their flowers in honor.

Many students presented their research at the gathering and each student received a diploma for their participation, with banners of honor awarded to each school. There were no student groups on my recent visit to Assisi’s War Cemetery, but I thought about them. I know that their visit had not only brought history alive for them but had also linked them to the young men who had given their lives to Italy and its liberation. I know each must have returned home that day feeling gratitude.