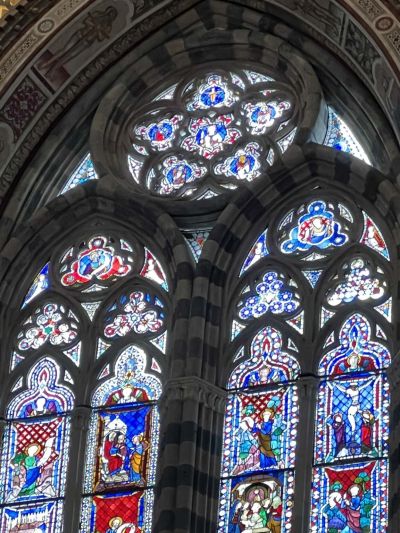 When touring Orvieto, the magnificent Duomo (cathedral) must be the starting point. The facade’s early 14th century marble bas-reliefs by Sienese architect Lorenzo Maitani and assistants, among other masters, are not only splendid adornment to the lower level but serve as instruction on Old Testament and New Testament lore for the local populace.
Inside the cathedral, the Chapel of San Brizio (to the right of the altar) is home to the fresco splendor of Luca Signorelli (1499-1501). Perusing the frescoes, you will notice the multiple self-portraits of Signorelli in his work, including the depiction of himself (with his long blond locks) next to his predecessor Beato Angelico (in his Dominican habit).
Signorelli’s “Compianto” (grief, mourning) is a moving piece in which the artist probably depicted his son, Antonio, as the crucified Christ in the arms of his mourning mother. Already training to be a painter, Antonio had died in Cortona in 1502 during a plague outbreak while his father was frescoing in Orvieto.
The pathos of the Madonna cradling her son is also artfully portrayed by Ippolito Scalza, Orvieto sculptor and the cathedral’s capomaestro (head of all works), in his 16th-century “Pieta” flanking the altar of the Orvieto cathedral. For me, Scalza’s Pieta is one of the most stunning sculptural masterpieces in all of Umbria.
The stained-glass windows, bordered at the base with finely cut agate sheets, on the wide walls of the church were created by Francesco Moretti and Ludovico Caselli between 1885 and 1905. They also replaced the 13th century windows of the apse.
After a Duomo visit, perhaps a walk past the Palazzo del Popolo, the medieval civic palace fascinating for its curved volcanic rock crenellation on the rooftop and unique in all of Umbria is in order.
Umbria’s art and history abound on my tours. Please visit www.annesitaly.com for more information on booking an in-person or virtual tour with me!