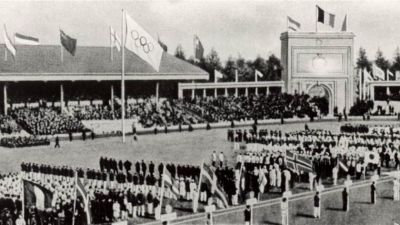 The 1920 Summer Olympics were held in Antwerp, Belgium. As the 2,600 plus athletes from 29 nations marched onto the field, the orchestra played each team’s national anthem. When the Italian team appeared, nobody could locate the music to the Italian national anthem. The conductor struck up a melody that all the musicians knew and every person in the stadium stood up and began singing “Che bella cosa e’ na jurnata e’ sole. N’aria e’ serena doppo na tempesta! (What a beautiful thing is a sunny day. The air is serene after a storm!) “O Sole Mio” was the most popular Italian song in Europe and in America where millions of Italian immigrants settled in the early 20th century.

This Neapolitan piece began as a poem in 1898. Eduardo DiCapua began writing music when he was 22. He studied at the music conservatory in Naples and continued learning from his father who was an accomplished violinist. He accompanied his father on a musical tour but before leaving for the Ukraine, poet Giovanni Capurro sent him a poem titled “O Sole Mio,” which translates, literally, as “My Sunshine” or in the Neapolitan dialect as “Oh, My Sun.”

On the tour, a homesick DiCapua, missing the warmth and sun of the Mediterranean region, set Capurro’s poem to music. Upon arriving back in Naples, pianist Alfrdo Mazzuchi transcribed the melody to the piano and performed the song finishing second in a Naples musical competition in 1898.

As “O Sole Mio” became more popular, it became a mainstay in Italian performances everywhere. Countless musicians and performers recorded the sunny standard and hundreds of singers from Caruso, Pavarotti, Lanza, Bocelli, and Franchi to Tony Bennett, Elvis Presley and Tony Martin established it as an international hit. The English version by Martin was “There’s No Tomorrow” while Presley’s was reworded to “It’s Now or Never.” The song has also been featured in several movies.

Tweet
More in this category: « The unbeatable experience of soccer in Italy Vinny Viola »