The unbeatable experience of soccer in Italy 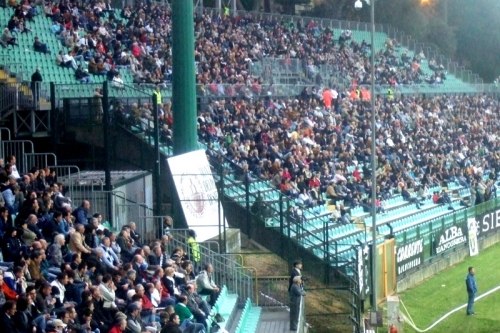 The unbeatable experience of soccer in Italy

Soccer in Italy is almost a religion. Being Italian is synonymous with being a soccer fan in Italy. Soccer seems to be everywhere, and every hotel lobby with a television screen has a soccer game turned on whenever Italian teams are competing. Last time I was in Italy I attended my first soccer game and it was a real experience.

Serie A is the top division of the Italian soccer leagues. Most consider Serie A the most elite and the best in the world. Beneath it are the other leagues including Serie B, Serie C1, Serie D and Eccelenza. The Serie A League consists of 20 teams. Each team must play all of the other teams twice, once in the home stadium and once in the opponent's stadium. A total of 38 games are played in a season which begins at the end of August and the last regular season game is played in May.

Currently, the top ranked teams are Juventus, Napoli and AC Milan at the time of press. Torino's Juventus has the largest fan base in Italy as well as throughout the world, especially in countries with many Italian immigrants. Juventus has won more titles than any other Italian soccer club, and in its 2011-2012 season Juventus was unbeaten and in first place. Its stadium in Torino has a capacity of 41,000 spectators.

AC Milan is one of the most successful teams in the world, especially in the last 15 years. The team plays at San Siro Stadium, which was a gift from Milan President Piero Pirelli in 1926. At that time it held 35,000 spectators, but as of the latest remodeling in 2008, San Siro Stadium hold 80,018 fans, and is the largest soccer stadium in Italy, followed by Olimpico Stadium in Rome and San Polo Stadium in Naples.. The stadium is also used for concerts and some of the greatest artists have performed there, including Bob Marley, Bruce Springsteen and Madonna.

Napoli is one of Italy's most loved teams with a very enthusiastic fan base and large crowds at every game. They plan in San Polo Stadium, which is the third largest stadium in Italy, having a capacity of 60,240 after renovations for the 1990 World Cup games.

Italian soccer fans are called tifosi and I got to experience firsthand what it is like to be part of that group. When I was in Siena I decided on a whim to attend a soccer game, after I heard all this noise and saw all these crowds behind my hotel. I inquired about the price of a ticket and was surprised that it was only eight euros so I bought one and went in. Siena was in Serie B at that time but in the next season it moved up to the elite Serie A. I found a seat in the bleachers and was surrounded by boisterous tifosi, both male and female.

It was nothing like an American football game because here in this relatively small stadium with a capacity of just over 15,000, fans cheered, booed, cursed and stomped their feet for every single play. They were yelling in Italian at the players and were completely involved the entire time. I loved it and found myself nodding in agreement and stomping my feet on the aluminum bleachers just like everyone else. The energy was electrifying. I loved the experience, despite not knowing anything about the team or the players. I could understand why this sport, called calcio in Italian, is such a big deal. Everyone should have this experience while traveling to Italy.

The ticket prices at the Serie A teams of course are more than eight euros but reasonable. For 30 or 40 euros you can get a ticket to what would be guaranteed an exciting event.

Tweet
More in this category: « Italy Defeats U.S. to Advance to Semi-final Round in 2014 Fed Cup "O Sole Mio" »