That Kaleidoscopic Rural Life of Nino, an Assisi Artist 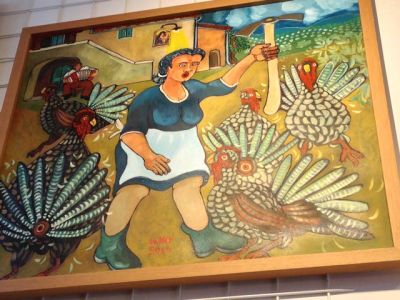 “I won’t paint subjects guaranteed to earn me money: I have to paint the memories of my rural childhood,” Nino told me with a grin as he held up the painting of his Nonna brandishing a small hoe over her head like a banner of victory, chasing her turkeys. “She struggled every night to herd them into the coop. Povera Nonna!”

In another painting, his kerchiefed Nonna rolls out buttery yellow tortellini dough for the traditional Umbrian Christmas dish, tortellini in brodo. Nino and his sister play with toys under the table near the pot filled with ingredients to add to the broth bubbling in the giant copper pot in the fireplace in the background. Garlic braids and strings of red peppers hang over the fireplace while bright red tomatoes are strung from the wooden beams of the ceiling to dry out. You can even see the traditional Umbrian bread cupboard, the matera, to the left of the fireplace.

What a joyous, kaleidoscopic rendition of a winter night scene I remember so vividly from our past years working the land. And another Nino masterpiece brings to life an Eastertime Umbrian rural tradition: a farm woman wanders the countryside with a huge basket of eggs and her fiddle. She’s been playing her fiddle from farmhouse to farmhouse, rewarded with gifts of the eggs she’ll need for all her Easter cheese breads.

The olive harvest and the grape harvest are among Nino’s favorite rural subjects. One painting brings alive a vineyard episode of Nino’s childhood: a bearded old farmer, cigar stub clenched in his teeth, guards his grapes with gnarled hands clutching his hunting rifle, hoping to scare away Nino and friends who’d nibble his prized zibbibo grapes. San Francesco and his followers harvest grapes in another vineyard painting which Nino showed me.

San Francesco appears in more than one Nino painting. In another, the Saint sleeps near “Brother Fire,” and one depicts Francesco and his followers caught in a snowstorm. A surprised San Francesco tries to save a crust of his bread from a greedy pheasant.
Local festivals appear in many a Nino work, like the celery vendor at the Trevi Festa del Sedano, Gubbio’s Corsa dei Ceri and Foligno’s Quintana (on a pitcher we have). Assisi’s Processione del Cristo Morto on Good Friday is there, too.

Nino’s lively paintings of il Cantarmaggio brought back fond memories of the serenading under our window on April 30th by song brigades of singing farmers, wandering house to house throughout the countryside all night, “singing in May” with accordions, cymbals, triangles, and lusty voices.

And rural scenes of chromatic glory come alive not only in Nino’s paintings but on his ceramics, too – and on silk scarves. You’ll see colorful scenes of accordion players at country festivals and animated ballroom dancing scenes, an integral part of Umbrian feste.
Such vibrant colors in the Nino palette. Critics have alluded to Ligabue, Guttuso, even Van Gogh when writing about Nino (Luciano Vetturini is his real name). I’ve lived in the Assisi area for years, continually on the search for “hidden treasures.” What took me so long to discover Nino?