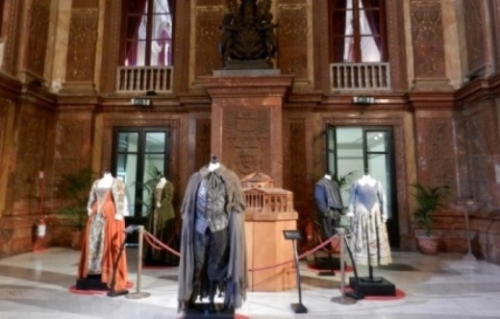 If you've ever been to Palermo, you are familiar with one of its most famous landmarks, Teatro Massimo, the grand opera house that is home to the largest stage in Italy. Situated in the heart of the historic district in Piazza Verdi, this nineteenth-century theatre is an architectural marvel. As Italy's largest indoor stage, Teatro Massimo is made famous as the backdrop for the final climactic scene in The Godfather III. I had the good fortune recently to not only tour this magnificent building, but to experience my first opera here.

Designed by well-known Italian architect Giovanni Battista Filippo Basile, Teatro Massimo was constructed ten years after its design was approved. Building began in 1874 on the site of a former monastery and church. When Basile died in 1891, his son, Ernesto assumed responsibility for completing the structure.

Not until May of 1897, twenty-two years after construction began, was this domed theatre dedicated to King Victor Emanuele II and opened with the opera performance of Falstaff. Supposedly the famous tenor, Enrico Caruso performed on that opening night.

Its exterior classical facade was inspired by Sicilian architecture and has the appearance of a Greek temple, similar to the temples seen at Selinunte and Agrigento. Six Corinthian columns stand on a platform accessed by a grand staircase, flanked by two large bronze lions, which greet patrons to the theatre. Sculpted busts of famous composers line the exterior of the building, adding to its architectural appeal.

Inside this awesome theatre, a wide lobby is resplendent with marble columns, impressive glass chandeliers and velvet draperies. Inside this two-story foyer, elaborate vintage costumes from previous operatic performances including Aida and La Traviata are on display. The lobby opens into the auditorium, which features the stalls on the ground level and five levels of boxes with a gallery above them. The stage is 30 meters wide, 40 meters deep and 50 meters high, making it the largest in Italy, and third-largest in Europe.

The magnificent interior impressed me with its rich colors of gold and red and its stunning painted ceiling. Other than the refurbished seats, most of the interior is original, including the Murano light fixtures throughout the auditorium.

The auditorium was originally planned to accommodate 3,000 people. Today, regulations only allow for a seating capacity of 1,350. Due for renovation in 1974, the opera house remained closed for 23 years as a result of politics, corruption and financial issues. In 1997, it finally re-opened, and today it arguably has the best acoustics in Europe.

Its innovative technology is visible in the unique ceiling, which consists of eleven removable panels that provide ventilation on warm nights and reduce noise from the air conditioning system. These panels operate on an elaborate system of rollers inside the dome. Although the theatre has air conditioning, it is not used during opera performances because it interferes with the singers.

Another unusual feature is the Echo Room, a circular chamber with amazing acoustics. If you stand in the center of the room and speak, everyone can clearly hear your words. However, conversations that take place outside the center cannot be heard, allowing for privacy.

For the low price of eight euros, you can tour this fantastic architectural Palermo landmark. Opera ticket prices begin at twenty euros for seating in the gallery, and the highest seats cost €120, still reasonable. I was lucky enough to purchase a seat for €85 for The Barber of Seville. My seat was in one of the first level boxes, just left of center. It was an awesome experience, and I look forward to my next opera!

Many families attend events here as a normal part of Italian culture. In addition to its operatic repertoire, Teatro Massimo hosts ballets, concerts and other musical performances throughout the year.

Tweet
More in this category: « Discovering the Dolomites Enchanting Gardens in Italy »