Modena: A city in contrasts 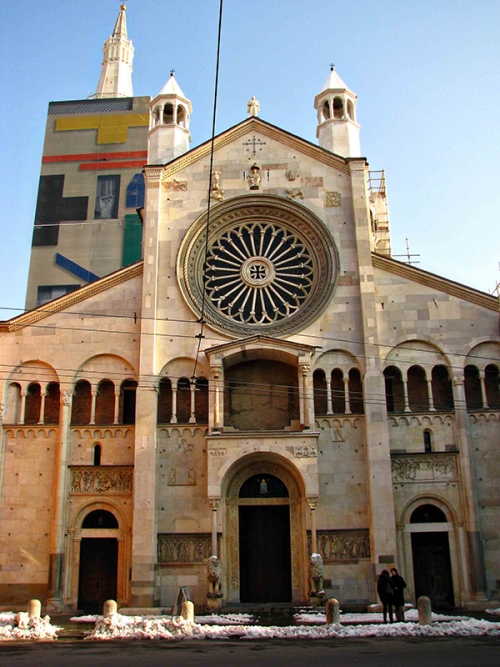 Mention Modena and most people quickly associate this charming city with the production of some of the best balsamic vinegar produced in the world. Located nearly 25 miles northwest of Bologna between Bologna and Parma, the city of Modena is a study in contrasts. While its outer city is a modern industrial business center, its inner city is a perfectly preserved and lively medieval center with cobblestone streets, one of Italy's most striking cathedrals, vibrant piazzas and impressive palaces.

Like most of the Emilia-Romagna provinces, the area where Modena now stands was part of the ancient pre-Roman Etruscan civilization's territory before Rome took over. The Romans established garrison towns along the Via Emilia in the second century BC. This was the main trade route between Rome and northern Europe, and it prospered until the decline of the Roman Empire.

The town revived again in 1861, when fortified walls were built around it. During the eleventh century Modena became a free municipality, which passed to the d'Este family late in the following century, who ruled it for several hundred years until the French invaded in 1796 and ruled the city for the next 20 years. The city changed hands back into the d'Este family, who ran the town until Italian unification in the nineteenth century.

The main area of this lovely town is the Via Emilia, which cuts through the historic town center from west to east. Flanking it to the south and north are the Piazza Grande and the Piazza Mazzini, the town's principal squares. The Duomo of Modena is a twelfth-century cathedral dedicated to St. Germain and has been declared a UNESCO World Heritage Site due to its impressive Gothic architecture.

The Ducal Palace was built in 1634 for the d'Este family, who occupied it for nearly two centuries. It is a monumental Baroque building that is now home to one of Italy's top military academies. Admission here is only by a guided tour, which costs approximately six euros.

The Museum Palace is home to several galleries including the Galleria Estense, which features the d'Este family's collection of northern Italian paintings from the late medieval times to the eighteenth century, showcasing the works of Correggio and Bernini in the d'Este family's former living quarters. Downstairs, the Biblioteca Estense holds one of Italy's most valuable collection of books, letters and manuscripts.

The Church of San Francisco lies at the heart of a maze of small medieval streets that feature markets and small piazzas. In the nearby town of Maranello you can visit the Ferrari Museum where you will be amazed at the world's largest collection of Ferraris. Maranello is just nine miles south of Modena. From Modena's bus station you can take bus 800 to Maranello for just a little over two euros.

The city of Modena is one of northern Italy's culinary capitals and an important gastronomic town famous for not only its high quality aceto balsamico, which is a favorite all over the world by gourmets chefs and restaurants, but also for its Vignola cherries, Modenese ham and Nocino, a bitter liquor made from the husks of walnuts. Modena is also known for its stuffed pastaslike cannelloni and tortellini, which are usually stuffed with pork and Parmesan cheese, and for its heavily spiced pork sausages. Another of Modena's specialties is Lambrusco, a lively, sparkling red, to be drunk chilled and served with virtually most Modenese dishes.

If you're planning to make a stop for a visit of Modena there are a large number of mid- to high-range modern hotels located just outside the historic center, near the city's industrial parks, which cater to the business travelers. In the central historic area you will find small, family-run bed and breakfast types with reasonable accommodations and several of its historic buildings have been renovated into high-end hotels.

Between late March and early May, Modena hosts its annual Modena Terra di Motori car fest in its historic streets made up of vintage cars and snazzy Ferraris. In late June and early July, enjoy the Serate Estensi Festival, which is a celebration of all things medieval involving banquets, jousts and historical costumes. During July and August, outdoor concerts and ballets are staged on the Piazza Grande. Modena's main opera venue is the Teatro Comunale and if you enjoy drama you will find it at the Teatro Storchi.

If you enjoy shopping be sure to load up on the local wine, grappa, and Modena's famous balsamic vinegar, which is aged anywhere from 3 to 100 years. On the fourth weekend of every month, except for July and December, a giant antiques fair is held in Parco Novi Sad.

The nearest airport to Modena is located in Bologna, just 25 miles to the south, and offers frequent shuttle buses to Modena. The Modena train station is located just north of its historic center and features daily departures and arrivals to and from Parma, Bologna and Milano.

View the embedded image gallery online at:
https://www.lagazzettaitaliana.com/region-of-italy/7622-modena-a-city-in-contrasts#sigProId63c9fa99ef
More in this category: « Otranto: A seaside jewel in Apulia The lure of Apulia »