Otranto: A seaside jewel in Apulia 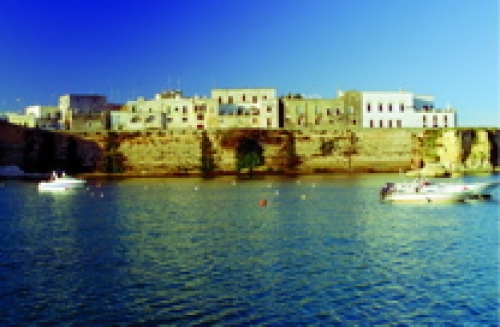 Each time I return to the region of Apulia I am mesmerized by its blue skies, clear turquoise sea, sun-bleached stone and dazzling white hilltop towns with twisting cobblestone streets. Seafood lovers can feast on fresh caught fish and savor on homemade orecchiette drizzled with its wonderful locally produced olive oil and bittersweet rapini served in shallow bowls.

While there are many beautiful and charming towns in Apulia, one town that I have grown to fall in love with is Otranto, a historic seaside town and port on the Adriatic coast close to the easternmost point of Italy in the province of Lecce. It is a small place with a lovely holiday atmosphere and is a "must" stop to include in your itinerary of Apulia.

Otranto is within the area known as the Salento, the tip of the peninsula, which is the heel of Italy's boot. It's a great destination for a day trip or a longer stay. This area is dotted with a rich array of architecture ranging from the medieval to Byzantine to Baroque reflecting the different invaders that washed over the Salento peninsula. The name Otranto is probably best known abroad for The Castle of Otranto, Horace Walpole's pioneering Gothic novel. Its picture postcard buildings range from Otranto's castle, which resembles a child's castle on a grand scale.

Like much of Apulia, Otranto has a colorful and mixed past. It was important as a Greek and then Roman port, called Hydruntum. Later it was ruled by the Byzantines, the Normans and the Aragonese. In 1480 the town was invaded by the Turks and 800 locals were executed for refusing to convert to Islam. The bones and skulls of the martyrs of Otranto are now placed behind glass in its cathedral.

The town's leading attraction is the twelfth-century mosaic in the town's Romanesque cathedral. It is a charmingly quaint, yet large-scale work carried out by a monk called Pantaleone. Pictures within the mosaic include religious stories like Noah's Ark, but also depictions of historical, mythical and even pagan figures, including Alexander the Great and King Arthur.

Alongside the cathedral is a small Museo Diocesano, which contains a few local exhibits including fragments of an earlier fourth- and fifth-century mosaic from the cathedral site. The bell tower was built by the Normans. The plain faÃ§ade boasts a Renaissance rose window. Once you get inside you will see its greatest treasure -- a twelfth-century mosaic floor beneath the seventeenth-century Moorish ceiling.

Otranto's real life castle, the Castello Aragonese, is a mighty construction that forms part of the tough defenses of the town. The fortified walls still enclose the historic centre and give a real sense of what an original walled town would have felt like.

In addition to its tourist sites, you can simply enjoy roaming the streets of this historic town, coming across picturesque scenes and views. The center is still enclosed within its defensive walls, which give it a real sense of history. The busiest streets are filled with tourists and lined with many souvenir shops selling ceramics, beachwear, coral jewelry, great scarves and gelato. Everywhere you will find bars, cafes and restaurants.

On summer nights, Otranto has a lively holiday scene. Here you can stroll along the walls above the sea where you can enjoy a glass of wine or have dinner while gazing over the harbor and bay.

Down where the massive walls mark the entrance to the old town is a pleasant little park, the Villa Comunale. From this point the seafront stretches around the bay to the north. These are modern areas, without the charm of the historic center, but still pleasant for a lovely seaside stroll and gelato. The beaches within the town are very small and very busy, especially during the peak summer months. The coastline outside Otranto is renowned for its beauty, and there are more stretches of popular beach to both north and south. If you have a car you can easily reach them. You can also take local bus service to many of the popular seaside spots.

A good seaside destination to the south of Otranto is Porto Badisco, a picturesque rocky cove. The local cooperative Navera can organize a whole range of excursions from horseback riding around the cape and trekking up the Valle d'Idro to guided tours of Otranto. The major feast here is the Festa dei Martiri Idruntini, which is celebrated from August 11-14 and commemorates the 800 faithful martyrs who fell at the hands of the Turks.

Getting to Otranto
The best way to reach Otranto is by flying into Brindisi or Bari. Both airports are served by flights from Rome. Otranto can also be reached by rail. Lecce is just over an hour away.

Author's Note: Otranto will be part of Davinci Custom Travel & Tours' 15 days/13 nights Best of the South & Sicily Group Tour departing from Cleveland on September 16 and returning on September 30, personally escorted by your truly. For more information visit: www.davincicustomtravel.com.

Peter D'Attoma is the president of DaVinci Custom Travel & Tours. He has over 25 years of planning and designing independent, custom and escorted tours of Italy for individuals, groups and incentives. For more information call 330-633-2292 or visit www.davincicustomtravel.com.

View the embedded image gallery online at:
https://www.lagazzettaitaliana.com/region-of-italy/7599-otranto-a-seaside-jewel-in-apulia#sigProIdb15ad962de
More in this category: « Public awaits 2010 viewing of Shroud of Turin Modena: A city in contrasts »