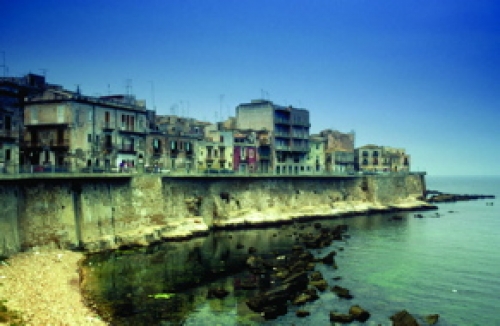 Situated on the southeastern coast of Sicily and sparkling against a backdrop of the Ionian Sea, it's not hard to immediately spot the appeal of Siracusa. One of the world's most ancient and powerful cities, it boasts a 3,000-year history and distinctive architecture. Siracusa is a city with a very quaint yet historic feel. It was once considered by Cicero to be the most beautiful city in the ancient world, rivaling Athens in both power and prestige.

Settled by the colonists from Corinth, Siracusa reached its zenith in the fourth century BC under the leadership of Dionysius the Elder, who defeated the Athenians at sea and set about building a capital worthy of its illustrious name. In the early third century BC, the ruler Gelon built a market area and necropolis, which are now famous archeological sites filled with temples, theatre and buildings. Luminaries such as Cicero, Plato and Archimedes flocked to his capital, cultivating the sophisticated urban culture that was to see the birth of comic Greek theatre. It became a Roman colony under Marcellus, who looted its treasure and art.

If you're planning a trip to Sicily, Siracusa should definitely be included on your itinerary. Because of its location -- across a narrow channel on the eastern side of Sicily -- and historical remnants of a proud and celebrated past, many tourists include the island on trips to Sicily. It is hard to believe that the main part of the great city was packed into an island only about a half a kilometer across and one kilometer in length.

More than two millennia worth of ancient history is preserved on Siracusa's island of Ortigia. Following a devastating earthquake in 1693, Siracusa was rebuilt in the unique and expressive Sicilian Baroque style; Ortigia retains much of this baroque character today. After a period of neglect in the mid twentieth century, this strikingly beautiful city has undergone a renaissance, including the restoration of many of its crumbling baroque palaces.

The ancient structures can make for days of entertainment alone, and what that doesn't cover, the natural beauty and amazing cuisine is sure to please you. The Greeks and Romans left many things of intrigue and beauty that even today continues to fascinate visitors. A very notable site is the Teatro Greco, a masterpiece of classical architecture famous for having one of the largest cavea the ancient Greeks ever built -- all 67 rows of it. This ancient theatre could once seat 16,000 people. Though not much of the theatre remains, the building itself was adapted by the Romans to fit the needs of their circus. The theatre is still used today; every summer it is brought to life again with a host of classical dramas.

For the best views of the city, climb up to the tomb-riddled Via dei Sepolcri. Nearby are the old stone quarries once used as prisons, the most famous of which is the manmade limestone cave, the Orecchio Di Dionisio (Ear of Dionysius, pictured). According to Caravaggio, Dionysius must have had it built so he could listen in on conversations of the prisoners, but it is most likely that the grotto -- 23 meters high and 65 meters deep -- was dug out as a rock quarry and later used as a sounding board for theatrical performances. Other versions tell that the cave was carved on purpose in this acoustically beneficial shape so as to amplify the screams of prisoners being tortured within. Across the other side of the Viale Paradiso is the second century AD Roman amphitheatre, the third largest in all of Italy after the Roman Colosseum and the amphitheatre in Verona.

Many of the sights of historic Siracusa remain for tourists to enjoy. Near the Ponte Nuovo stands the oldest Sicilian Doric temple, the Temple of Apollo, which is at the entrance of Ortigia. Though little remains of the once magnificent temple, two pillars and parts of some of the walls attract many visitors.

To see what the actual temple would have looked like, visit the Archaeological Museum in Siracusa, which has a model of the original. Siracusa's Archaeological Museum is the most extensive in all of Sicily. Its collection includes fossils and figures of Ancient Siracusa and its jewel is the statue of Venus Uscendo dell'Acqua (Venus Emerging from the Water).

The Island of Ortigia is the spiritual and physical heart of the city. It is the oldest part of Siracusa and the most distinctive. Filled with artifacts from every stage in Siracusa's long history, its overwhelming feeling is of baroque excess. You can access the island across the Ponte Nuovo, past the inner harbor filled with fishing boats and Venetian palaces.

The Piazza Duomo, located in the center of Ortigia, was the setting for Giuseppe Tornatore's 2000 film Malena. The Duomo itself was converted from the ancient Greek Temple of Athena, and archeological evidence indicates the site was used even before Greek civilization by the ancient Siculi peoples, making this the site of continuous worship for nearly 3,000 years-- the longest used sacred site in Europe. Even more extraordinary is an altar built by the Siculi three centuries earlier, the only surviving evidence of the island's first settlers. Along the seafront, the fountain of Arethusa is a fresh water spring just steps from the salty Mediterranean.

Getting to Siracusa and hotel choices:
Siracusa is reachable by air from both Rome and Milan to Catania, which is one hour from Siracusa. You can also take a overnight train from Rome Termini train station for the 12-hour journey, which includes crossing over the Straits of Messina by ferry. There are many car rental agencies that you will find at Catania airport.

The best accommodations can be found in Ortigia. My favorite is the Grand Hotel, located on Viale Mazzini 12, Ortigia. This is the top-class hotel that caters largely to American clientele and has a spectacular rooftop restaurant that is a must for an evening visit. Free shuttle service is provided to their private beach.

Another hotel option is the Hotel Roma, located on the Via Minerva 10. Hotel Roma sits right behind the cathedral and has been beautifully restored, offering excellent luxury options and a very friendly staff.

For a mid-range hotel, choose the Domus Mariae, located on the Via V Veneto 76. This restored former school for nuns on Ortigia has been transformed into an elegant, comfortable hotel. It has great character and many of its rooms face the sea. It is run by the nuns who know how to turn out an impeccable room.

Siracusa is a great travel destination appealing to many varied interests, especially if you love history, antiquities, politics, archaeological sites and museums along with the warm hospitality and charm of the Sicilian people.

Author's note: Siracusa will be a part of DaVinci Custom Travel & Tours Best of the South & Sicily group escorted tour on September 16-30, personally escorted by yours truly.

Peter D'Attoma is the president of DaVinci Custom Travel & Tours. He has over 25 years of planning and designing independent, custom and escorted tours of Italy for individuals, groups and incentives. For more information call 330-633-2292 or visit davincicustomtravel.com.

View the embedded image gallery online at:
https://www.lagazzettaitaliana.com/region-of-italy/7594-sicily-s-siracusa#sigProId416f278a33
More in this category: « Get a Gondola in Venice! Lago di Garda: A secret holiday paradise »