In the Cucina with La Gazzetta: Pasta and Zucchini with a Saffron Cream Sauce 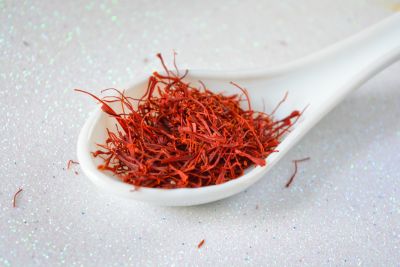 Saffron is considered the world’s most expensive spice because of the amount of labor that is needed to produce it. Saffron comes from a crocus that has been cultivated for centuries across the Middle East and Europe for use in cooking, textile dyes and for medicinal purposes. It takes 80,000 flowers to produce just one pound of Saffron. If you can imagine a purple crocus, the saffron comes from the three small red threads in the center of the flower.

In Italy, it is used in cooking to give dishes such as pasta and risotto a flavor described as sweet, nutty, and grassy as well as a rich golden color. If you have had Spanish Paella or a golden risotto from Northern Italy, you have likely tasted Saffron. Saffron is grown in Italy particularly in the regions of Sardinia, Marche, Tuscany, Emilia, Abruzzo, and Lombardy.

I was recently treated to a dish of pasta tossed in a Saffron Cream Sauce and fell in love with its taste. I thought it would be the perfect recipe to share for February so that you can make it for your Valentine to show just how special he or she is that you made a meal with the world’s most expensive spice! Fortunately, you do not need a lot of saffron for this dish. While you might be splurging a little, you will not be breaking the bank.

Saffron can be purchased at specialty supermarkets or on Amazon. For this dish, you can use any pasta. I had it with good old spaghetti, but it would be great with fettucine or even penne. To make this a heartier meal, you can also add browned and sliced sausage to the pasta dish. Serve with some warm, crusty bread, a crisp salad and a bottle of red wine and you will have a complete meal.

In a saucepan, heat heavy cream over medium heat (do not bring it to a boil). Once heated, add Saffron strands. Stir the sauce and cover the pan. Turn off the heat but leave the pan on the burner to keep it warm. Clean and cut the zucchini into small to medium size chunks, set aside. In a skillet add the butter and slowly melt butter. Add chopped onion and saute until it turns golden. Add the zucchini, salt and pepper to taste, and cook until the zucchini is lightly browned and soft but not mushy. Add the saffron infused cream sauce to the skillet and cook until it thickens a little and reduces by no more than one third. (If it remains too thick, add a small amount of the pasta water until you have a creamy sauce). When the sauce is ready, turn off the heat and add the cooked pasta. Toss and coat pasta with the sauce. Add the grated parmesan and toss more to cover the pasta. You can add the browned sausage at this step and toss with the pasta. Serve immediately.