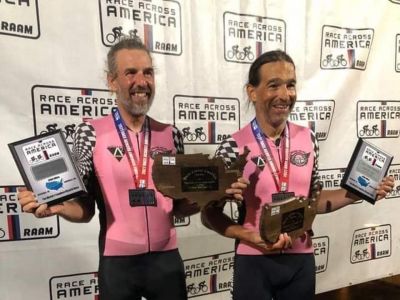 Giovanni Prosperi and Philippe May

Ultracycling is a grueling yet very rewarding sport that has been gaining speed in America year after year. Ultracyclists compete in bicycle races not less than 125 miles in length or six hours in duration, however, most races are much longer. As stated on ultracycling.com, “ultracycling is more than just a long bike ride. Ultracycling invites an athlete to find their very best inside themselves while riding their bicycle.”

The most ambitious ultracycling race is the Race Across America (RAAM). For 35 years, the RAAM has been challenging ultracyclists from around the globe to push their physical and mental limits to the farthest reaches. Spanning 3,000 miles, climbing 175,000 feet, and crossing 12 states, finishing the RAAM puts these athletes into an elite group. Athletes can compete in the RAAM as a solo racer or on a 2-, 4-, or 8-person relay team. This year’s RAAM was held in June and for the first time in the history of the race, an Italian can claim victory.

Giovanni Prosperi is an Italian citizen living in Broadview Heights, OH with his wife, Dr. Katerina Greer, a gastroenterologist practicing at University Hospitals and Rainbow Babies and Children’s Hospital in Cleveland. Giovanni became interested in cycling years ago while living in Rome. Working in video editing, he sat at a computer for lengthy amounts of time. One day, he remembered he had an old bicycle and thought “let’s go for a ride.” He has not looked back since.

Giovanni joined a cycling group in his hometown of Sora, Italy. His goal was to go “as far as possible on the bike,” and that goal still exists today. “I began competing in cycling races in Europe without much success. But I love to ride, so I keep going,” Giovanni told La Gazzetta. Giovanni’s wife, Katerina, is an American originally from Slovakia. She was living in Italy and is also an avid cyclist. It was through cycling the two found each other. They eventually married and moved to the U.S.

In 2021, at the age of 45, Giovanni entered the Race Across America as part of a 2-person relay team called Twisted Cycling. He met his teammate, Philippe May of Switzerland, just eight days before the RAAM. Phillipe’s original teammate had resigned from the race forcing him to put a call out on Facebook for a new partner and Giovanni answered the call. The two met on June 11 and trained together that following week in Borrego Springs, CA. Temperatures were over 100 degrees daily, very typical conditions for the RAAM. After the five days in the desert, the team finished their training in Oceanside, CA, the locale of the RAAM’s starting point.

On June 19, 2021, the Race Across America Team Start saw Giovanni and Phillipe ready to test their mental and physical strength. For 3,000 miles from Oceanside, CA to Annapolis, MD, the teammates suffered temperatures well over 100 degrees and altitudes up to 11,000 feet through Colorado. With each man cycling 30-50 miles nonstop per leg, the teammates experienced heat and humidity, rainstorms, and the most difficult part of these rides - sleep deprivation, all while pedaling around-the-clock across the country. On a teammate’s “off” leg of the race, he would spend time in their “Mothership,” a van following them with the ability to cook meals, carry supplies, do laundry, and allow for whatever amount of sleep one can get in a cramped, moving vehicle.

In an ultracycling race, only one cyclist per team can be on the road at a time. The time never stops and the cyclists ride from dawn to dusk and dusk to dawn. “The toughest component in these long-distance races is sleep deprivation,” Giovanni states. “Your adrenaline is pumping for hours on end and even though your body is tired, your mind does not rest well. Add that to the uncomfortableness of a moving vehicle!” “I raced for 500 miles in 40 hours with no sleep during one race. The day after the race I could only sleep for four hours! But, the following week, I could fall asleep anywhere, anytime,” he says with a laugh.

Giovanni is a vegan who credits this lifestyle to much of his physical abilities. “My wife is a gastroenterologist, who also helps tremendously. Katerina solves all my digestive problems during my races. It is not easy to feed yourself appropriately while riding non-stop. She is always on my crew for my ultra races and is my number one supporter. I owe all my successes in ultracycling to her.”

On June 28, 2021, the 2-man relay team crossed the finished line first in their category. The entire journey took 8 days, 14 hours and 4 minutes. “The greatest moment of my races is always realizing that the power of my mind, my willpower, is greater than my fatigue. That is the true meaning of ultracycling. Mind over body.” “I am so grateful to Phillipe for giving me the opportunity to join his team in the RAAM. Because of this race, I discovered something about myself. I have the ability and willpower to do something this physically demanding. I can give my best and finish a race like this.”

Winning this portion of the RAAM was a dream come true of Giovanni’s. When asked what is next, he replies, “competing in the RAAM solo, of course!” La Gazzetta Italiana is rooting for you, Giovanni!