On the Cover: The Processione dei Misteri di Trapani 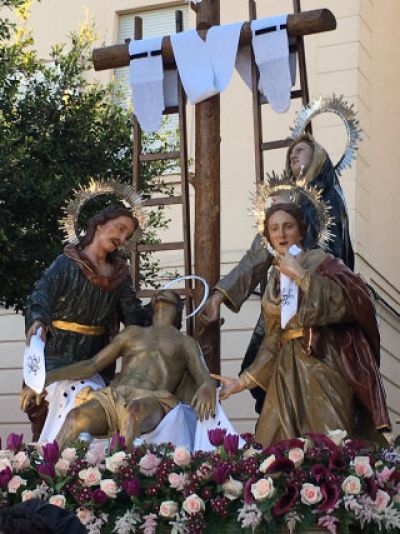 The Processione dei Misteri di Trapani or simply the Misteri di Trapani (the Procession of the Mysteries of Trapani or the Mysteries of Trapani) is a day-long passion procession featuring 20 floats of lifelike wood, canvas and glue sculptures of individual scenes of the events of the Passion. One of the most ancient religious festivals in Sicily and in Italy, the Misteri procession in Trapani is an extraordinary piece of evidence of the religious vocation of the island.

The Misteri di Trapani is the longest procession in the country, running for about 24 hours, and one of the most sensational spiritual events as well as one of the oldest continuously running religious events in all of Europe. The Misteri’s history dates back to before the Easter of 1612 and has played every Good Friday since then.

In the late middle ages and early Renaissance, the manifestation of Holy Week spread widely all over Europe. Passion Plays, dramatic performances representing Christ's Passion from the Last Supper to the Crucifixion, were particularly appreciated. Eventually, beginning in the Spanish Empire, the plays were substituted by processions of figurative art in the form of finely crafted sculptural groups depicting the various episodes of the Passion of Christ.

Trapani, Sicily called its sculptural groups Misteri, referring to the mystery of Christ and, probably, to the Sicilian word misteri meaning procession or craft. Local artists created these art pieces which were placed onto a wooden structure. The statues are generally made of silver with golden and coral decorations. They are covered in flowers and dressed with prestigious clothing.

In ancient times, the Brotherhood of San Michele was in charge of executing the Misteri as well as providing the workforce to carry them around the city. The Brotherhood no longer exists so, today, members of ancient Maestranze (arts and crafts) are trusted with the demanding task of organizing the entire event as well as carrying the ancient statues around the city.

Local citizens, authorities and even visitors from other parts of the island and Italy participate in this celebration. An extraordinary display of lights, bands playing in the streets, works of art depicting the Passion and Death of Christ, the never-ending parade that winds through the beautiful city center, and more bring this ancient celebration to life year after year. Perhaps one of the most peculiar bits of the tradition is the annacata, a movement performed by the massari (those who carry the vare). Squads of muscular men grasp one another’s shoulders, pressing close into a crosshatch of intertwined arms as they hoist the sculptures aloft. Sweating and grimacing, they weave in a wavelike rhythm, the annacata, stepping forward and back and side to side making the statues sway.

One last added touch of a sensational lighting system makes nighttime and dawn the most enchanting moments as the 20 shadows dance along the walls of ancient Trapani buildings. The Processione dei Misteri di Trapani truly is one of the most unforgettable experiences one can ever have.

View the embedded image gallery online at:
https://www.lagazzettaitaliana.com/people/9680-on-the-cover-the-processione-dei-misteri-di-trapani#sigProIdcae197e90c
Tweet
More in this category: « An Italian American Star from Hoboken A Look Back: Easter Traditions »