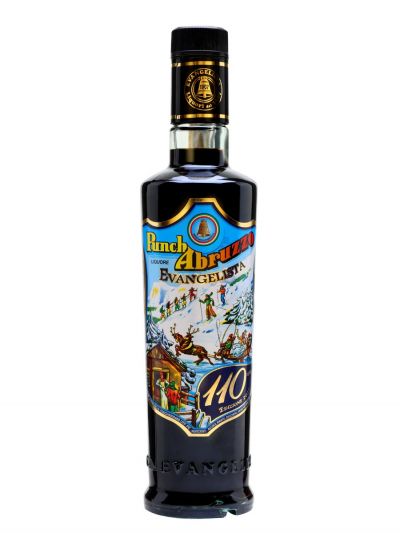 In 1907 in the small mountain town of Borrello, Italy, lived Antonio Evangelista. Highly appreciated and respected as the town’s mayor, he was known for his strong passion for alchemy.  During the long and cold winter evenings, the Mayor had the habit of preparing a special beverage, which heated by the fireplace released an intense and intoxicating aroma, a true antidote against the bitter cold, but also a moment of hedonistic relaxation.

The continuous and insistent demands for this beverage, defined at this point as “magical” or that “warmed even the soul,” lead the Mayor to commercialize it under the name of Punch Abruzzo, thus founding the company Evangelista Liqueurs.

In addition to Punch Abruzzo, Antonio Evangelista created other prominent liqueurs: Centerbe, Amaro, Anisetta, Sambuca, Limoncello, Grappa, Dry Gin, and more. Evangelista received numerous gold medals awarded to the company in various competitions in Italy and the U.S. During WWII, Borrello was bombarded and the company, although destroyed, had the strength to lift itself up through tenacity and dedication and in the 1960s, the Evangelista name was fully established for the quality of its products.

In 1983, it was decided to move the company to Sambuceto (in the Province of Chieti), to ensure the company’s survival and growth. A street named after Antonio Evangelista remained in Borrello and on the antique factory’s façade “Premiata Distilleria Evangelista” can still be read.

Mario Ferrando was born in a small town named Forli del Sannio located in the Molise region of Italy. He was the second youngest of nine children. His hometown was not too far from where, in 1907, the mayor of a small mountain village first created the aromatic liquor called Punch Abruzzo. The product was well-known in the region and to Mario’s family, but due to strict import regulations they were only able to have a bottle or two shipped every year or so and they cherished the dark, caramelized liquor with every sip.

In 2001, Mario, his son, Joe, and his brother, Anthony, went to Italy for a 10-day adventure with a side purpose of finding the distillery that produces the delectable liquor known as Punch Abruzzo. They had the most amazing meals at family-owned restaurants in towns that many have never heard of. The adventure continued and took them to an obscure town on the Adriatic shoreline in the Abruzzi region called Chieti. There they found the Distilleria a’ Evangelista.

It was the end of the day. They were salivating at the mere thought of being outside of the factory that created their beloved beverage. As they were sitting in the car imagining the seemingly unlimited amount of punch that must be behind those doors, who should appear but Mr. Claudio Cosanni, the CEO and husband of Evangelista’s daughter. Imagine their excitement. Mario got out of the car and immediately started talking to him in Italian. Claudio did not seem receptive at first. The day was over. He had his hand on his car door, desperately wanting to go home. Suddenly, something Mario said changed Claudio’s entire demeanor and to their delight, they were invited inside. Claudio offered a tour of the facility followed by a brief meeting in his office, where they started the ball rolling to bring their favorite liquor to the U.S. and Ferrando a Forli Corporation was born.

Presently, the original Punch Abruzzo in one-liter bottles is the only product imported by Ferrando a Forli Corporation and sold exclusively through ItalianPunch.com and liquor stores throughout the state of Ohio. Punch Abruzzo, born as a beverage to savor, can be served hot in the winter, but also appreciated and loved as a cold drink. It is also a great digestivo or on ice cream to make an affogato. Punch Abruzzo’s amazing texture and flavor not only goes well in coffee and desserts but compliments many exciting dishes. Visit ItalianPunch.com to place your order and get a taste of Punch Abruzzo today!

Tweet
More in this category: « 11 Italian Greats in Sports and Italian Insights A Look Back: Springtime in Tuscany »