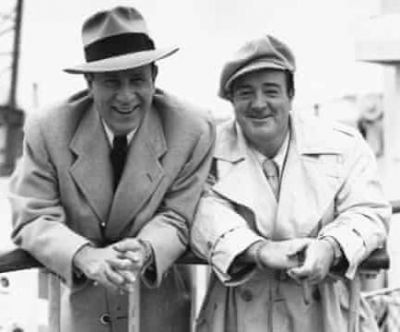 Lou Costello was one of the funniest and gifted American comedians of all time. The saga of this legendary comedian begins in Paterson, NJ amid a typical Italian American family. Paterson had a large Italian population, specifically in the Little Italy, Stony Road and Sandy Hill sections of town.

Louis Francis Cristillo was born in the Sandy Hill section of Paterson on March 6, 1906. Louis was the son of Sebastiano and Helen Cristillo. Sebastiano was an Italian immigrant from Pentone, Calabria and Helen’s father, Luigi Rege, was born in the northern Italian region of Piemonte in 1864.

While growing up in Paterson, young Lou attended School 15. He was considered a gifted basketball player who was talented at shooting free throws. As a youngster, he loved to watch silent movies and was a big fan of Charlie Chaplin. Lou was a boxer for a short time as a teenager, under the name of Lou King, until his parents saw him with a black eye.

After graduating from Central High School, he worked at a hat store for a few years. He saved some money and hitchhiked to Hollywood in 1927 to try to find a career in the movie industry. He worked as an extra and his athletic skills helped him earn some uncredited appearances as a stuntman in films. He can be spotted sitting ringside in “The Battle of the Century,” a 1927 Laurel and Hardy film.

After being disappointed over his lack of success in Hollywood, Lou decided to head back to New Jersey in early 1930, but, along the way, ran out of money in St. Joseph, MI. While stranded in St. Joseph, Lou was hired at a local burlesque theater as a character with a German accent for $16 a week. During that time, he started going by the name of Lou Costello, in honor of Helene Costello, a popular actress. After becoming a local star in St. Joseph, Lou was able to move to NYC.

Costello found work in vaudeville and burlesque theaters in the Big Apple. He met Bud Abbott in January 1933 while booked at the Republic Theater on 42nd St. At that time, Costello had a stage partner and Abbott was teamed up with his wife, Betty. Costello met a burlesque dancer named Anne Battler. He married Anne on January 30, 1934. Costello worked on stage with Abbott for the first time at the Eltinge Theater, after Costello's partner became ill in 1935.

The following year, the two men finally teamed up. However, they often argued. Abbott was a known alcoholic who constantly humiliated Costello and Costello refused to be disrespected. Eventually, Costello stopped confronting Abbott on his behavior as he felt that their personal problems would ruin their performances.

The duo's big break came in 1938 on the popular radio show “The Kate Smith Hour” where they were regulars for two years with their signature routine "Who's on First." They gained a tremendous amount of exposure and success on Smith's show. The following year, they appeared in “The Streets of Paris,” a popular Broadway musical.

In 1940, they were signed by Universal Pictures. That same year, they had supporting roles in “One Night in the Tropics.” Although they captivated the attention of moviegoers in the film, their roles in 1941’s “Buck Privates” truly made these comedians stars.

After working as regulars on Edgar Bergen's show with his wooden dummy Charlie McCarthy, they started hosting their own radio show, “The Abbott and Costello Show,” in October 1942.

Sadly, Costello’s baby boy accidentally drowned in the family swimming pool in 1943. Costello's entire character changed after the tragedy. It was not long after that when the partnership of Lou Costello and Bud Abbott began to change for the worse. Although they barely spoke to each other off camera, they reluctantly appeared together in the films “Little Giant” and “The Time of Their Lives.” The two actors eventually decided that their partnership was too important to jeopardize and patched things up in 1947.

In 1951, they became part-time hosts of “The Colgate Comedy Hour,” a popular television show on NBC. The following year, they became television hosts of “The Abbott and Costello Show” which aired for two seasons and was very successful. Entertainment Weekly ranked the show 28th on its list of the “100 Greatest TV Shows of All Time” in 2013.

By 1955, Dean Martin and Jerry Lee Lewis had taken over the reins as the biggest comedy duo. Abbott and Costello were dropped from Universal after making 36 films together. The following year, the IRS charged them for back taxes, forcing both men to sell their homes and most of their assets, including their film rights. Their partnership took its final turn after a disagreement in 1957.

Costello made several solo appearances on “The Tonight Show with Steve Allen.” In the summer of 1958, Costello worked with comedian Sidney Fields at the Dunes Hotel in Las Vegas. Shortly after completion of “The 30 Foot Bride of Candy Rock,” his only starring film appearance without Abbott, Costello suffered a heart attack. He died at Doctors Hospital in Beverly Hills on March 3, 1959. Costello was three days shy of his 53rd birthday. His wife Anne died nine months later of a broken heart. By 1961, Abbott began performing with a new partner named Candy Candido. But it was short-lived as "No one could ever live up to Lou."

Lou Costello Memorial Park was created in the town of Paterson as a tribute to the famous comedian in 1992. Madison St. in Paterson was also renamed Lou Costello Place in 2005. In 2009, Costello was inducted into the New Jersey Hall of Fame. Lou Costello and Bud Abbott each have three stars on the Hollywood Walk of Fame for their work in radio, television and motion pictures.

Tweet
More in this category: « A Look Back: Little Italy Bakeries Across the U.S. Quarterback Rick Cassata Into Hall Of Fames »