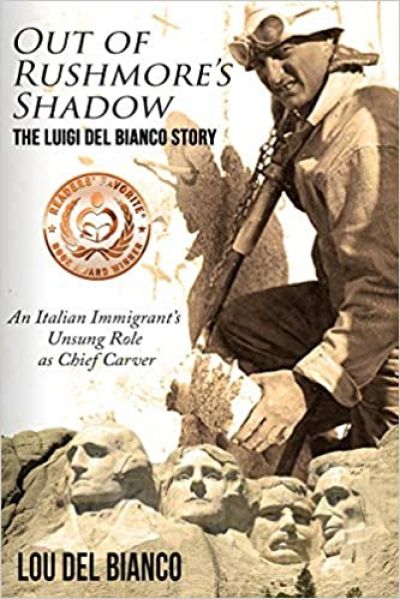 “Out of Rushmore’s Shadow: The Luigi Del Bianco Story” is a biographical account of Italian immigrant, Luigi Del Bianco, the chief stone carver of Mount Rushmore. In this book, the author, Lou Del Bianco, Luigi’s grandson, shares the story of his heritage and quest to rightfully restore an extraordinary relative’s role in American history.

“Out of Rushmore’s Shadow,” is truly a fun, enlightening and great learning experience. Within the first few chapters, I was already engrossed in the true story of a young Italian boy discovering his grandfather’s remarkable past. At first, when Lou discovered that his grandfather, Luigi Del Bianco, had worked on Mt. Rushmore, he was utterly fascinated. Unfortunately, as Lou grew up and navigated his adolescent and teenage years, the novelty wore off. However, as a young adult, Lou made the decision to delve into researching his grandfather; and he did it with passion.

“Out of Rushmore’s Shadow” describes Lou’s excitement for researching Luigi, whether it was plucking through files in the Library of Congress or visiting Mt. Rushmore itself. For Lou, finding Mt. Rushmore-related documents bearing the name “Luigi Del Bianco” was like a small child finding a long-lost toy underneath his bed. As I read the first part of the book, which focused on Lou learning that his grandfather was Chief Carver at Mt. Rushmore, I shared a similar childlike excitement. I cannot imagine the thrill of being told that my own grandfather was Mt. Rushmore designer Gutzon Borglum’s right-hand man in carving the mountain, and the eagerness I would have to discover the rest of the story.

Delving into part two of the book, which focuses on Luigi’s life, I took note of Luigi’s experiences as an Italian immigrant, and if those true experiences aligned with what I expected to encounter. I also kept watch for ways in which Luigi might have had Italian stereotypes thrust upon him. The first thing I noticed is in chapter six of the book during a conversation between Lou and Howard Shaff, who wrote a biography of “The Master” Gutzon Borglum. Shaff remarks that “Luigi was a classic example of the immigrant who came to America not knowing how to assimilate and promote himself in the art world.” That is, the world in which Luigi was well-versed and that he desired to pursue a career. Despite his struggle, Luigi was indeed a successful immigrant.

After being raised by his well-to-do Italian parents and receiving a prestigious stone carving education in Austria, Luigi embarked on the long voyage to the U.S. and managed to make a life for himself. Some may call it luck, but I think he needed more than luck to land the role of Chief Carver on Mt. Rushmore. Luigi had a talent that he was passionate about. Not only did he procure a position alongside “The Master” Borglum, he also forged a close friendship and earned the full confidence of Borglum.

Recently, I had the pleasure of corresponding with Lou Del Bianco to discuss his book and ask further questions about his remarkable grandfather. I was very curious to see if Lou had anything further to say about Luigi’s experience as an Italian immigrant. Lou shared that Luigi was undoubtedly treated better than many unskilled immigrants, especially within the Italian community. What I found most touching, though, is when Lou stated that “no job was ever beneath him.” Even though he devoted much of his time to carving Mt. Rushmore, he was not above taking side-jobs such as bricklaying.

Though Luigi achieved success in his career, he and the rest of the Del Bianco family faced many hardships and felt a constant pull to return to their home country. Tragically, he and his wife, Nicoletta lost their five-year-old daughter, Teresa. Luigi was also challenged with discrimination like most other immigrants. Despite holding one of the highest positions while on the job at Mt. Rushmore, not everyone gave Luigi the respect that he deserved. During my conversation with Lou, he explained that Luigi’s position was somewhat of a “double-edged sword.” Luigi’s high position as an immigrant was grounds for jealousy among the Americans who did not think they should be paid less than Luigi, an Italian carver. Several chapters in the book illustrate Luigi’s struggle to receive the higher pay he deserved for his crucial work on the mountain. These instances led to several periods where work was ceased on Rushmore, due to Luigi’s refusal to return without the proper pay. Borglum expressed this issue as “petty dickering over wages” and always gave his best efforts to grant Luigi the pay he knew he deserved. Both Borglum and Luigi’s letters make clear the fact that “the influences in Rapid City” were potentially enough to push Luigi away from the opportunity of a lifetime, and a friendship of almost 20 years.

After reading Lou Del Bianco’s biography of his grandfather, I will never look at Mt. Rushmore the same. Having the knowledge of the immensely talented immigrant who, despite trials, had a most vital role in creating a great American monument. A monument that would not have happened without Luigi Del Bianco.