A Positive Side to the Virus Disaster in Venice? 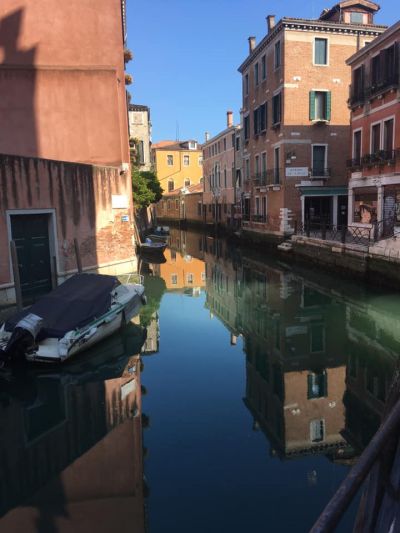 The last time I was in Venice it felt strange. It was at the time when news was just beginning to reach us about the spread of the coronavirus from China to Europe. With two days to go to the end of the Carnival, it should have been very busy, but the streets and alleyways were virtually empty. There were very few tourists and no Chinese tourists at all. At the time, we felt privileged to be there without the crowds, making the most of the empty cafes, churches and museums, never for one moment realizing how serious it would become.

Now, though, Venice is silent, a sleeping beauty. Its only income is from tourism and it makes you wonder how the already diminished population can possibly survive. There are no boats on any of the canals, neither vaporetti nor gondolas, but this has led to an unforeseen bonus. With no activity along the waterways, the sediment is not churned up and the water has become clear. You can see the bottoms of canals and even tiny fishes swimming there. I’m hoping that this will finally encourage the Venice Port Authority to ban the giant, ugly cruise ships which have been destroying the Giudecca Canal by the dredging necessary to get them into the port. Dredging removes the mud which helps to preserve the millions of wooden stakes on which the ancient buildings of Venice are built. Venice is sinking not only because of high tides but because its balanced ecosystem is disappearing. Maybe now they will see the light and keep the waters clear.

Fake news has reported wildlife returning to a quieter Venice. The photograph of swans near a bridge wasn’t in Venice itself, but in Burano, a nearby island in the lagoon, where they have always lived. A report of “Venetian” dolphins was accompanied by a photograph of the seas around Sardinia. The only wildlife is the fish, but they have always been there, I suspect (I’ve occasionally seen them), but invisible in the murky waters. These reports were probably by people who wanted to write something positive about the crisis. I recommend, instead, a look at Venezia Pulita (clean Venice), a Facebook group formed to highlight and celebrate the return to a calmer, pollution-free Venice.

Tweet
More in this category: « The Early Italians and Irish in New York City Life in Lockdown »