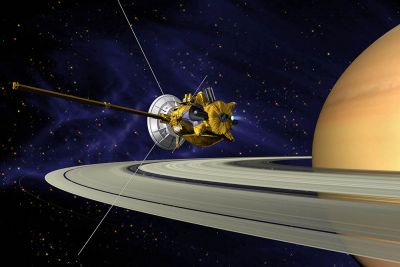 Unmanned spacecraft Cassini-Huygens is continuing to record data from Saturn. There are two parts to the craft: the Cassini orbiter, named after Giovani Cassini, and a lander for Titan, named after seventeenth-century Dutch scientist Christiaan Huygens. The spacecraft was launched in 1997 and still continuing its mission today.

NASA's Cassini probe is the fourth probe to visit Saturn and the first ever to orbit the planet. The probe has been studying the planet since its arrival to Saturn in 2004. It has many objectives, including the research of geological history on Saturn's natural satellites, and studying the atmosphere of the planet and its surroundings.

The Cassini probe is equipped with 12 instruments to help it accomplish amazing feats, including observing wavelengths of energy that normal humans cannot see and detecting magnetic fields and dust particles.

The probe is expected to continue performing until its planned destruction on September 15, 2017, when the craft will intentionally fall to Saturn's atmosphere. This will be the safest option for the probe's dismantlement and it will prevent damage to any of Saturn's many moons.

The Cassini space probe was named after Italian astronomer Giovanni Domenico Cassini due to his involvement in his discoveries about Saturn and its natural satellites. Giovanni Cassini was born in mid-seventeenth century Perinaldo, a municipality in Italy. He's known for his work in various fields such as mathematics, astronomy, and engineering. Some of his most famous work includes his discovery of Saturn's natural satellites and important information about Saturn's rings. Some more down-to-earth successes includes his accurate topographical map of France.

Giovanni Cassini worked with scientists Giovanni Riccioli and Francesco Grimaldi to complete his education, and in 1650 he was appointed as the principal chair of astronomy at the University of Bologna. He left for Paris to assist with the Paris Observatory years later. Cassini married Geneviève de Laistre in 1674, and he died in 1712 at 87 years of age.

The Cassini probe's Grand Finale orbit has been planned, and after nearly 20 years in orbit, its mission will finally be complete after diving close to Saturn where no orbiter has gone before. Such as with Giovanni Cassini's discoveries, this space probe will continue to education the people of Earth about what lies beyond our planet.