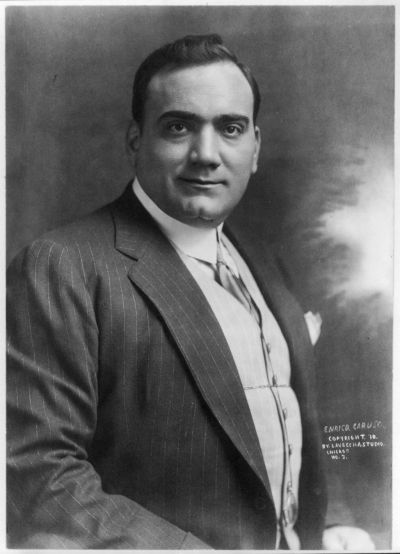 He has been acknowledged as the greatest tenor ever. Errico Caruso was a Neapolitan with minimal education who never played a musical instrument, sang largely by ear and couldn’t hit a high C, but had a pure voice and an astute memory for songs. More commonly known as Enrico Caruso, he set the standard for the contemporary greats of the later 20th century: Pavarotti, DiStefano and Domingo.

Caruso made his first recording in a hotel suite in Milan in 1902. Over the next 19 years of his life he made 488 recordings, almost all for Victor label, literally putting the record company on the map earning several millions for the label and himself. In 1902, his sobbing “Vesti la giubba” (Put on your costume) from Leoncavallo’s “Pagliacci” sold more than one million records making him the first recording star in history to do so. His recordings established opera with the American audience and set the model for later generations of tenors.

Caruso made his Metropolitan Opera debut in New York in November 1903 and for the next 18 seasons made 607 appearances in 37 different operatic productions.

This master of interpretation with superior command of phrasing began his singing with street minstrels and in the backstreet theaters of Naples. He became a lead singer in 1900 at the La Scala in Milan and soon the round, paunchy Caruso was earning $7,000 a month. He performed in gigantic venues as large as New York’s Yankee Stadium without amplifiers and microphones. Audiences resonated with his natural voice and feelings. As each year passed, he became an ever more celebrated singer – described as one never to be rivaled.

Outside of theater, Caruso used his fame and earnings to not only live “the good life” indulging in luxurious clothing, furnishings and collectibles but was also extremely generous with money and drawings he created as a gifted caricaturist. He helped raise millions of dollars for Allied causes during WWI. He often gifted money to family members and shared with stagehands and others at the end of concert productions. This warm-hearted Neapolitan with a gusto appetite also paid his taxes early. He reasoned if anything happened to him, the government would already have the money in hand rather than going through the process of “collecting what rightfully belongs to them.”

His expansive lifestyle, unchecked appetites and increasing demands took their toll on his health. In 1921, Caruso passed away from pneumonia and peritonitis. He was 48-years-old.