On the Cover: The Greek Theatre of Taormina 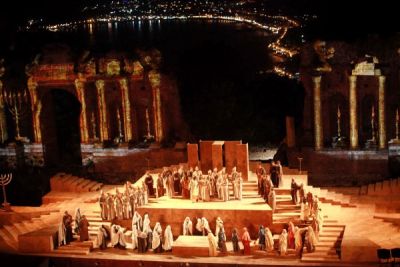 The Greek Theatre of Taormina is without question the most important feature for sightseers in Taormina. The ancient theatre boasts a very fortunate natural setting, with splendid views of the Calabrian coast, the Ionian coast of Sicily and the spectacular cone of Mount Etna.

The construction of the amphitheater likely began around the third century B.C. at the time of Hiero II. For the construction to begin, the Greeks had to manually remove over 3.5 million cubic feet of rock from the mountain. The location was later renovated and expanded by the Romans, who inserted columns, statues and ingenious covers.

The Greek theatre of Taormina was originally created to accommodate dramatic performances or musicals and was transformed during the Roman times to make room for games and gladiator battles.

The theater is divided into several parts. The scene is the most important part that remains of the theater and preserves, in part, its original form. But nothing remains of his ornaments and columns. According to many scholars, the first order was made up of nine columns arranged in groups of three, while the second was formed by 16 columns. It is said that these columns arrived by sea to Villagonia where they were then attached with ropes and pulled by hordes of slaves to the Theatre. During the Middle Ages most of these columns were removed to build palaces and embellish places of worship, including the Cathedral. The scene is obviously where the actors used to perform.

The orchestra of the theatre was the area for the musicians, but the choruses and dancers also performed there. In Roman ages, it was transformed into an arena for gladiator games.

The cavea is carved into the rock, It is the series of steps, from the lowest to the highest ones at the top, where up to 5,400 spectators were seated. The first and last semicircular steps were 200 and 500 feet long, respectively. The steps were carved out of the rock and, in places where there was none, they were built in masonry.

Behind the wall of the upper closure of the cavea, is the Portici, two large, brick porches that accompanied the whole development of the cavea. The vaults of the arcades supported a terrace each. The first porch supported the lower terrace, divided into several rows of wooden seats reserved for women, while the arc of the second porch, which claimed the highest terrace of the theater housed the humblest people.

The access stairs made three turns and narrowed as they rose. They led to three doors that introduced the auditorium: the first gave entry to the authorities and important people, the other spectators had to continue to go up in order to enter the auditorium from the other two doors.

The Greek Theatre of Taormina is still one of the area's best attractions and is one of the world’s best known and most admired theatres.

Tweet
More in this category: « A Look Back: A Liturgical Pax from Renaissance Florence