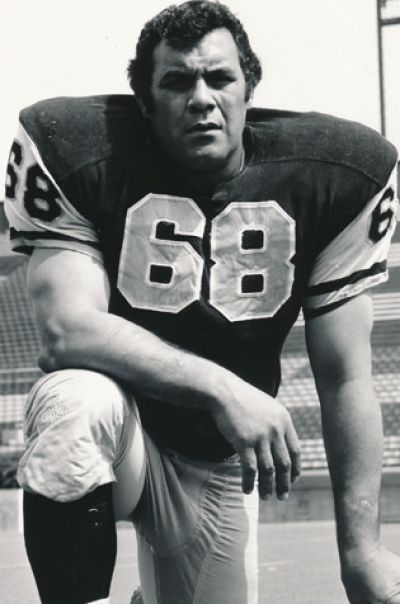 The 1960s through the 1980s were great football and wrestling times for first-generation, Italian American Angelo Valentine Mosca. Mosca never imagined he would someday become a sports celebrity and legacy in Canada and North America.

Mosca grew up in the hard-scrabble streets in the north end of Boston, embedded in the gambling and prostitution district of the city. As fate would have it, Mosca’s physical gifts would eventually empower him to become an international sports celebrity for his exploits on the gridiron and in the wrestling ring. It became a rags-to-riches story of an incredibly-determined and physically-gifted Italian American kid who overcame the near impossible to achieve both the American and Canadian Dreams in one lifetime.

Thankfully for Mosca, his size, speed, and incredible athletic ability in football rescued him from a potential life of waywardness and criminality that he was introduced to as a youngster by his father, the well-known Italian bookie in the neighborhood. Young Mosca was born to an Italian immigrant father from Syracusa, Italy, Angelo, and a second-generation Italian American mother, Agnes, who was half-Italian and half-black.

Mosca grew up impoverished as the oldest of six siblings and was subjected to physical and verbal abuse from his alcoholic parents. “My dad beat us and was always screaming at us about being black. I didn’t fully get what was supposed to be wrong with us kids, and I certainly didn’t know how the black part fit in. All the kids in the neighborhood liked us. I even used to organize neighborhood baseball games. The Italian kids would play the Irish, and we never lost a game,” writes Mosca in his 2011 book with Steve Milton, “Tell Me to My Face.”

“I wasn’t proud of being poor and I was willing to work hard so I wouldn’t stay poor. I realized now that as a child I didn’t want to be dependent on anyone. I began working all the time, and I hustled too, both long before I was a teenager,” writes Mosca. At age 16, Mosca left home to live with relatives.

“I had started playing football in high school, and I was working out in the Waltham Boys Club like a maniac. No one else worked out back then, but I had an idea in my mind of being totally independent, and becoming stronger and tougher was part of it. Being good at sports was my rebellion. Sports were becoming my guiding light. Without them I’d have probably ended up in jail,” writes Mosca.

Mosca was drafted by the NFL’s Philadelphia Eagles in 1959, however he had already decided to play in the Canadian Football League (CFL). Mosca played for the Hamilton Tiger-Cats, the Ottawa Rough Riders and the Montreal Alouettes from 1958-1962. He played his final years, from 1963 to 1972, in Hamilton.

Mosca especially remembers how glorious the 1967 Grey Cup-winning Hamilton team was. “The 1967 Hamilton Tiger-Cats were the greatest football team I’ve ever seen assembled in Canada. I always say it was the core of the team that all came of age at the same time. Zuger, Barrow, Ceppetelli, Henley, and I were all 28, 29, 30-years-old and full of experience. Cepetelli was the center, Jon Hohman and Bill Danychuk were the guards, Charlie Turner and Ellison Kelly were the tackles. That was the greatest offensive line I’ve ever seen. We had Tommy Joe Coffey and Tommy Grant catching the ball, and Dave Fleming and Willie Bethea, running the ball,” writes Mosca. “The Grey Cup win was the sixth straight game that we didn’t allow a touchdown, and in the three playoff games, including the Cup, we allowed all of four points. Nobody’s ever going to convince me that our club wasn’t the greatest team this country has ever seen. Four points in three games at the most important time of the year? Forget about it,” writes Mosca.

In recognition of his outstanding play in Hamilton, Mosca was placed on the Tiger-Cats Wall of Honor, and he was the second Hamilton player to have his jersey (68) retired.

There is a very memorable play in Mosca’s illustrious career. A tackle in the 1963 Grey Cup game saw Mosca controversially knock British Columbia (BC) Lions star running back Willie Fleming out of the game. People questioned, did Mosca kick him in the head while he was down? A short, online video shows the hit, but it is inconclusive after review. Some viewed it as accidental, and others still argue it was a “cheap shot.” The referees did not flag it, but the BC fans and media did. BC fans never forgot it or forgave Mosca.

In 1964, the CBC news magazine program featured a 10-minute documentary about Mosca, dubbed “the meanest man in the game.” Mosca explains, “I created an image and everyone thinks I am dirty. There’s no such thing as dirty play, unless you’re kicking people in the face.”

Mosca further explains: “Hey, it just happened, it wasn’t a late hit, I came from about 45 yards away to make the play and slid over the top of him.” Clearly, it can be viewed as a late hit but not a cheap shot as critics dissected and overstated the controversial hit.

The controversy persisted for almost five decades in the minds of some of the CFL players of the memorable 1963 Grey Cup championship game. In 2011, the grudges held came to a vicious head when Mosca and former BC Lions quarterback Joe Kapp, well into their seventies at the time, got into a fight at a CFL Alumni Association charity luncheon and fundraiser in Vancouver. Oddly, one of the objectives of the luncheon was to revisit the 1963 hit on Willie Fleming and determine whether it was, in fact, a late hit.

A video of the 2011 event shows that Kapp shoved a daisy flower in Mosca’s face twice on stage, prompting Mosca to swing his cane in his left hand, striking Kapp in the right side of his face, cutting him and knocking his glasses off his face. Kapp immediately charged the seated Mosca and punched him in the face, knocking him off his chair and the stage, leaving all in attendance in bewilderment.

Mosca and Kapp were both startled and humiliated by their behavior. “It’s a shame it happened,” Mosca told the CBC in November 2011. Kapp responded, “The altercation should have been avoided there because it was a celebration of teamwork and togetherness in the country (Canada).”

The video of the Mosca and Kapp skirmish went viral, with over 647,000 views on YouTube. It was mentioned on ESPN’s “Monday Night Football” and on Fox TV’s “The O’Reilly Factor.” The worldwide publicity earned Mosca and Angelo Mosca, Jr. an appearance on “The Phil Donahue Show” as well. Kapp was invited to the interview, but declined.

To his creative credit, Mosca has always thought big about entertainment value like few athletes before him. Mosca auctioned off the cane he used against Kapp for $7,700, with the charitable proceeds going towards the CFL Alumni Association’s “dire straits” fund for struggling former players. Turning negative PR into a great humanitarian cause.

Angelo Mosca passed away on November 6, 2021, after a long bout with Alzheimer's disease in Hamilton, Ontario. In next month’s issue we will take a look into Mosca’s successful wrestling career.

Tweet
More in this category: « On the Cover: Il Renon's Earth Pyramids A Look Back: Discover Your Family History Through DNA Research »