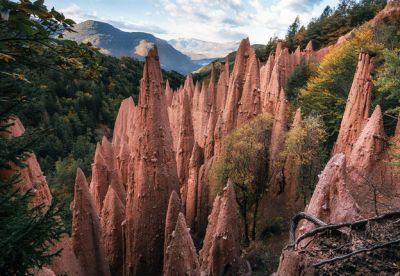 On the sunny plateau of Renon, a city in South Tyrol in northern Italy, a bizarre natural design lines the landscape. Europe’s tallest and most perfectly shaped earth pyramids are found in several locations on Il Renon. Just a 12-minute cable car ride from the bustling city of Bolzano, Renon is a delightfully quiet plateau offering great panoramic views of the Dolomites.
Numerous well-marked trails afford hikers a visit to alpine farms, pastures, picturesque little lakes, like Costalovara, and the bizarre earth pyramids, cone-shaped pillars formed by deposited clay and a boulder on top, creating unusual shapes that are constantly evolving due to erosion, until a final collapse leaves room for new formations.
While the earth pyramids are often shrouded in mystery, there is an explanation for their existence. Earth pillars started forming from moraine clay soil left behind after the last Ice Age when the glaciers of the Valle d'Isarco covering the valley melted away. In dry conditions, the soil is hard as stone, but, as soon as it rains, it turns into a soft, muddy mass, starts sliding, and so forms 30 to 50-foot steep slopes. Through additional rainfall, these slopes will erode. However, where there are rocks in the muddy mass, the clay soil underneath these rocks stays protected from the rain. So, while the surrounding material is continually carried off with the weather, the protected pillars literally rise out of the ground to form majestic earth pyramids.
It is hard to tell how long the formation of a full-blown earth pyramid actually takes, simply because it depends on too many factors. It is just as difficult to assert how old an earth pyramid might be or can get. It is certain, however, that the biggest and prettiest ones develop over the timespan of thousands of years.
Earth pyramids often find their demise. Once the boulder falls from an earth pyramid’s peak, an earth pyramid quickly ‘dies.’ Because the pillar below the boulder is exposed to the rain, the pillar shrinks with every rainfall. While one earth pyramid vanishes through this process, a bit further up the slope, the next one comes to life.
On your next trip to Italy, lose yourself amongst Renon’s famous earth pyramids.

Tweet
More in this category: « A Look Back: I Grandi Matrimoni, Southern Italian Style CFL Hall of Famer Angelo Mosca »