On the Cover: Arco Magno 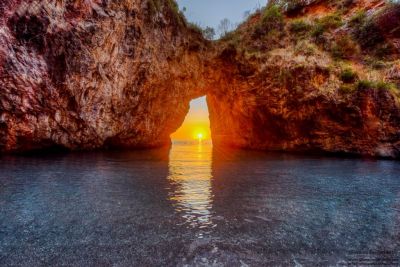 Nature’s beauties are abundant in Italy. From Mount Etna to Lake Como to the hills of Tuscany, visitors and locals alike can admire some of Mother Nature’s most wonderful creations. In Calabria, Italy, the Arco Magno in San Nicola Arcella, a small Calabrian village between Scalea and Praia a Mare, is truly a rare and unique piece of natural beauty.

When speaking of Italian beaches, we must first praise the magnificent Tyrrhenian Sea which, in these parts, has earned the prestigious Blue Flag Award and whose shades of turquoise, lapis, and emerald fuse with the incoming waves. To qualify for the Blue Flag, a series of stringent environmental, educational, safety, and accessibility criteria must be met and maintained.

Arco Magno (great arch) is considered one of the most beautiful beaches in Calabria. Located beneath a natural arc shaped by the erosive action of the crashing waves of the Tyrrhenian Sea on the rock, it owes its name to this imposing arch that frames access to the sea from the beach. The crystal-clear, blue water laps onto the beach of this hidden cove of pebbles and shale where hundreds of thousands visit annually to bask in the Italian sunshine.

It does take a little effort to reach the beach of Arco Magno. But the journey is well worth it. The beach can be accessed by land or by sea. Visitors can follow a scenic, marked path carved into the rock, walking over from the parking area at Marinella. The path is short, but narrow and steep and could be slippery. However, the views over the Tyrrhenian coast of Calabria, including the beach resort of Praia a Mare and the small island of Dino off the coast are worth the trek. Another option is to arrive by pedal boat, kayak, or rental boat. This route is equally scenic.

Arco Magno is at its most spectacular at sunset as the sun falls right in the middle of the arch creating a most magical atmosphere.

The nearby town of San Nicola Arcella is also worth a visit. Its historic center sits slightly above sea level. The main church, San Nicola da Tolentino, is visible from anywhere in the town. The church dates to the 17th century and is dedicated to the town’s patron saint. The town’s historic center is covered in beautiful murals depicting the town’s history that dates back to ancient Greece. This is a fairly recent project by the artist Angelo Rago.

The next time you are in Calabria, add this treasured piece of mother nature and its surrounding towns to your list of destinations.

Tweet
More in this category: « A Look Back: My Love Affair with Sicily A Look Back: In Italy It's All About the Food »