A Tribute to Fr. Richard Rasch 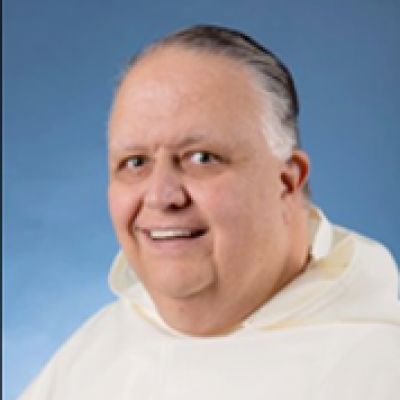 Father Richard was truly a man for others. He worked tirelessly for everyone in his priestly life, which included his parishioners, prisoners, friends, family, and even strangers.

Father was a master at creating lasting relationships with just about everyone that he ever met. I was one of the fortunate people to call him one of my closest friends.

I believe that his greatest accomplishments came about as pastor of Our Lady of Mount Carmel church. Although Father Richard had limited financial recourses, he always managed to keep our parish and school in solid financial shape. Therefore, he left his mark in the history of our parish and our community at large.

He was a magician at stretching the buck, but would often say, “we do what we can.” Father always had his core group of people in his circle to rely on for help. Whether that came in the form of volunteering for a committee, working at the church festival, or making a financial commitment, Father was on it!

Father would often invite me to lunch at the rectory, which was quite an honor to share a meal with he and his fellow friars. Pasta was served at every meal!

I will miss his kindness, sense of humor, commitment to his vocation, and our many visits by phone and in person. He showed us all how to live the Gospel and to believe that God will provide.

Fr. Richard was such a great man, kind and humble. He loved his vocation and the people he served and especially Catholic education. I was so blessed to work with Fr. Richard on all the various boards he recruited me to be a part of at the church. I am not originally from Mt. Carmel or Cleveland, but Fr. Richard found a way to find a connection for me from my churches in Youngstown to here (St. Anthony had a Mercedarian Priest at one point) and always reminded me of those connections. He also got me involved with the festival and knew how to get me to agree to help out.

Fr. Richard just knew how to read people and learned so much about everyone on a personal level. Because of that he made the day Ronnie and I were married so special. Fr. Richard made it known in his own way that he approved of Ronnie and I when we were dating. I think he even cried a little after we did our vows.

Everyone who knew him was blessed to have met him. We were all blessed this year that we got to have him at the festival one last time and see him smiling with us and have one more shot of Limoncello with him!

It was 20 years ago, but it seems like an eternity. I had just entered the Mercedarian Friars as a postulant. As a young man of 24, I was filled with zeal and dreams. The nation was in crisis. Earlier that month, two planes had crashed into the Twin Towers. Everyone was aware that we weren’t as safe as we thought.

In that month of September 2001, I first met the major superior of the Mercedarians in the U.S. I was nervous that I wouldn’t make a good impression. Fr. Richard quickly put me at ease. He was so simple and unassuming. He had a soft voice and a gentle spirit that was only concerned with serving.

I remember being shocked at how the major superior would stay after community dinner and help the postulants with the dishes. He took the trash out and wanted to do the lowest job. He talked about working hard and trusting that “God would provide.”

In the years that followed, I grew to love and respect this man who served as Vicar Provincial for 13 years. Fr. Richard didn’t have all the answers that I wanted, but he always listened and tried to help me to understand that trusting God and doing your best were the essence of discipleship.

Some of my most happy memories were visiting Mt. Carmel. It was always abuzz with activity. Fr. Richard was in the middle of three things at once, but he somehow always had time to stop and listen to anyone who called or stopped by.

Fr. Richard was a gifted fundraiser. He knew that it was all about relationships; getting to know people; being available at any hour; entering into each family as if it were his own. Father did this by being totally approachable. Everyone felt comfortable in his presence. Within a few minutes, you knew him and trusted his motives.

It is still hard to believe that he is gone. We can’t call that priest who would always answer the phone. He will not be contacting us about his next project.

Fr Richard was “special.” He was totally unassuming and selfless. This part of him will always be remembered. Rest in Peace, Father! May you receive the reward of your selfless love for people.

I was asked by Bob Mazzarella if I would drive Fr. Richard and the Mercedarian Sisters to the Niagara Falls, NY area to spend the day sightseeing and meet Fr. Richard's. I happily agreed to the trip.

After 6:30 a.m. mass on July 27, I pulled into the Mt. Carmel school yard to pick up Fr. Richard and nine Mercedarian nuns in a beautiful Mercedes Sprinter van. It was a pleasant ride to our first stop at Niagara Falls with Fr. Richard and the nuns praying the rosary and singing some beautiful hymns. It was a very busy day at Niagara Falls and parking lots were full, but a kind police officer, noticing my passengers, let me park the van for free in an illegal spot.

From Niagara Falls we stopped at Niagara University where Fr. Richard studied and then made a stop at a beautiful shrine of saints nearby. From the shrine we proceeded to meet Fr. Richard's sister, Rita, and aunt and uncle for an outdoor dinner at a great Sicilian restaurant in Lewiston, NY.

Our last stop of the day was Rita's house for coffee and dessert. At around 7:45 p.m., we said our goodbyes and got back on the road for our trip back to Cleveland. The prayers and singing continued as I drove up to the toll booth near the Ripley, NY exit near the PA state line. I paid the toll and as I tried to accelerate, the van made a muffling sound and would not move. Other cars behind me started beeping their horns and I heard several people yelling "move that van!!"

Fr. Richard, who was sitting next to me also angrily said, "Come on Charlie, let's go, what are you doing??" I told him I was pushing the gas pedal but the van would not move. A NY state trooper then pulled up next to me and told me to move. I told him that there was a mechanical issue with the van. The angry trooper threatened to write me a ticket for blocking traffic at a toll booth. I told him he could write me 10 tickets, but the van was not moving. I asked him to pull behind me and push me out of the way, but he would not.

I turned to an agitated Fr. Richard and the now very nervous nuns. I put the van in neutral and myself, Fr. Richard and eight of the nuns in full habits pushed the van out of the way. It was like a scene out of a movie. People got out of their cars and were videotaping us on their phones and there was clapping and cheering. The not so helpful NY state trooper could not believe it when he saw who my passengers were as they helped move the van.

I called Bob Mazzarella and told him the story, which he could not believe. He said he would send another van and driver to pick us up, but we were still three hours from Cleveland. I called a local tow truck which arrived an hour later and posed a new issue. How to get everyone to a nearby truck stop as the truck cab could only fit three people.

I told the tow truck driver he had to put the van with Fr. Richard and the nuns inside on the flat bed of his tow truck. It took some convincing but he finally and very hesitantly agreed. He drove slowly to the truck stop. It was almost 10:30 p.m. as we pulled in. We sat and talked in the small dining area and began the three-hour wait for our rescue vehicle to arrive.

I told everyone that at midnight it was my birthday and we needed to celebrate. I bought everyone their choice of ice cream from the Good Humor ice cream cooler. Right at midnight Fr. Richard and the nuns sang Happy Birthday to me. It was beautiful and I will never forget that special birthday memory!!

Our rescue driver arrived at around 1:30 a.m. and we safely made it back to Our Lady of Mt. Carmel at 4:30 a.m. It was a long but very memorable day with some very beautiful people. May my dear friend Fr. Richard rest in eternal peace with Jesus and the Communion of Saints.