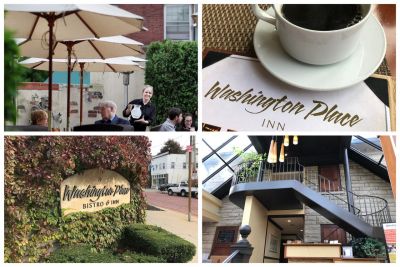 A "perfect storm" led Scott Kuhn of the Driftwood Restaurant Group to shut down the restaurant and seven-room inn that he has owned for 10 years in Cleveland's Little Italy neighborhood.

"It kind of made it an easy decision, unfortunately," he said. "It's a restaurant that has really tight dining rooms, almost impossible to social distance. With our lease expiring in August, and the property was recently sold, and there is a big construction project planned that basically surrounds the restaurant that could take up to year, I felt it was too risky of a proposition. Despite being good operators, sometimes being good isn’t good enough."

He added: "I think restaurants are in the same situation as Washington Place where you have a decision to make on another five years where you’re locked in and you have other restaurants in your umbrella that are healthy and can ride this storm out. I think sometimes you have to make difficult decisions for the greater good of the company. I just unfortunately felt Washington Place would become an anchor around the company’s neck that we can’t afford in this environment."

Washington Place landed annually on cleveland.com's A-list, with popular dishes like macaroni and cheese with Mackenzie Creamery goat cheese and chorizo. Meatloaf was featured on the Cooking Channel. Pork shank with huckleberry glaze, pot roast and beet salad also were popular, he said, and a weekend brunch featured an array of well-prepared items from Bananas Foster French Toast to Maine lobster and manchego omelet.

Its location turned out to be a "blessing but also its curse," Kuhn said of the quiet bistro that once housed the well-regarded Baricelli Inn at 2203 Cornell Road. The current construction project involves a three-story nearby building with underground garage.

The restaurant "was a formal-looking building, and I think some people were hesitant. It became truly a special-occasion restaurant, and it was never intended to be. But sometimes things have their own idea, and that's how it played out, and that's how we ran it."

The restaurant sits in a refurbished 19th century mansion, offering a dose of elegance in the neighborhood that is blocks from Case Western Reserve University.

"We're going to miss Washington Place," he said. "That was the first place I was able to put my own personal stamp on. I really poured my heart and soul into that. It was a great learning place for me. It really was a diving board for what was to come for Driftwood. I kind of found my place there."

The loss is not a harbinger for Driftwood, though. "I feel confident. I'd be the first one to tell you I was on the ropes. But I feel very confident in the company to see this thing through the end. It was always going to be a question if we were going to renew the lease. "Had Covid not come along, we still might have made the decision not to renew the lease, but the decision was made infinitely easier as soon as this virus took hold."

While the confluence of factors led to Washington Place's closure, a pending wave of shutdowns could be coming when government's business loans come due, Kuhn said. "If you don’t have the money to pay them back," he said, "that's when you’re going to see restaurants close."

This article first appeared on www.cleveland.com.