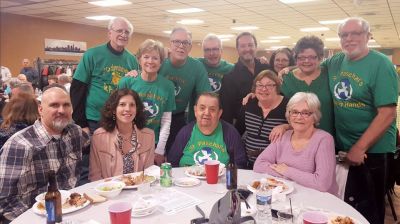 On March 23, over 150 people gathered at the Club Molisani Charities hall in Wickliffe, OH to play bocce, bid on prizes and participate in a $5 side board to raise money to benefit Helping Hands Ministry of St. Paschal Baylon Church in Highland Heights, OH.

Helping Hands is a ministry through which group members reach out to the homeless and less fortunate in the Greater Cleveland area. They provide food and essential material items, such as clothing, toiletries, tents, blankets, and a hot meal and spread God’s peace, love and joy to those in need.

The bocce benefit was organized by Chuck Giomuso and Club Molisani Charities. Chuck is a longtime member of Helping Hands. He got involved about 20 years ago when one of the Church's parishioners made an announcement about it after mass. When asked why he joined, Chuck replied, “Life has been pretty good to me and I wanted to do something to give back, to help those in need.”

Over 100 people volunteer with Helping Hands. They now have three trucks that take volunteers and needed supplies to wherever the homeless are: streets, alleys, under bridges, and in the woods. Every Wednesday evening, rain or shine, a small group affectionately called “Knight Riders” distributes whatever is needed to homeless men and women.

The idea of a bocce benefit evolved out of the bi-weekly game Chuck has hosted at his Kirtland Hills home each summer for the last nine years. Originally just a gathering for Chuck and some of his classmates from the St. Joseph High School Class of 1970, it grew to include friends and family. Because Chuck and many of his friends are involved in Helping Hands, those attending Monday Night Bocce decided they would use the gathering as an opportunity to garner support for it.

During the winter months, the Monday Night Bocce group missed playing and seeing each other, so they decided to find a place for an indoor game. Club Molisani Charities’ indoor courts were a great spot to gather, play bocce and continue to support Helping Hands. After two years, the word spread and the indoor bocce event grew. This year’s bocce benefit was the most well-attended and, with proceeds totaling over $7,300, the most successful so far.

Chuck is very grateful to all who played a part in organizing the event including the volunteers, the cooks, the servers, and the businesses that donated items for the raffles and auctions. He also wanted to express his appreciation for the generosity of those who came to the event or sent a check in their absence. Chuck would especially like to thank Club Molisani Charities for donating the use of the hall and the courts and the club members who volunteered their time to prepare the delicious food.