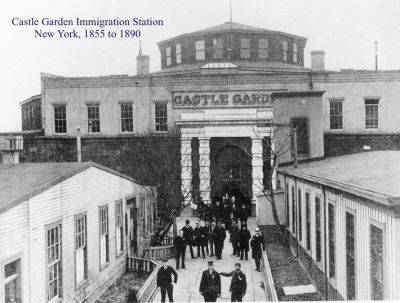 Continued from our June issue, “…From Agnone to Hubbard Township” follows the transmigration of four Agnonesi who left Italy after its unification to find a better future in the U.S.

Transmigration and a Hellish Voyage

The four Agnonesi boarded the Erin at Le Havre along with 750 passengers, 550 of whom were Italian emigrants. By this point, the vessel was five days late and all but three stewards had abandoned ship. Her propeller was damaged and her boilers were faulty. Understaffed and underpowered, the compromised Erin departed for America. Plagued by stormy weather, the 15-day passage became a 28-day nightmare during which the ship barely reached a speed of five miles per hour.

Throughout the voyage McDonnell witnessed the plight of the unfortunate Italians. Against regulations, 300 of them were lodged in makeshift bunks lashed to the main deck in front of the toilets. They spent most of the trip huddled together, shivering and drenched with seawater. The quality of the food was no better than that of the bedding. At the serving of the meals, three stewards attempted to do the work normally performed by a dozen. And they were often drunk. The foreign passengers were mocked, cursed and struck with food. Some of them were seriously injured by the blows and needed medical attention.

Landfall and Putting Down Roots

As the ship approached New York, the temporary bunks on the deck were torn down to allow the vessel to pass inspection. For the last days of the voyage, the 300 passengers who had been berthed in these crude arrangements were forced to sleep in the open on the bare, wooden deck. The Erin limped into New York harbor on January 2, 1873. As a contemporary news account observed: “The Italian emigrants who arrived from Le Havre in the Erin looked wretched. They were much emaciated and bore the traces of the rough weather and the ill treatment received on board.” Six people had died during the crossing from lack of medical care, including a newborn. All were Italian emigrants. But the four from Agnone had survived.

For Alfonso, Angela Maria and the two Filippos, the terrible ordeal was finally over, at least the sea voyage part. After the travelers passed a rudimentary inspection at the Castle Garden immigration station, they joined thousands of other immigrants who had entered the U.S. through the Port of New York. Since work opportunities in New York were very limited – only occasional jobs in street cleaning and snow removal – in March of 1873, the four responded to a call from the Mahoning Valley to work in the coal mines in Hubbard Township. Not only the Agnonesi wayfarers, but also 100 other Italians landed jobs that February with the Ohio coal company.

Upon arrival in Trumbull County, the Italians were put to work as strikebreakers in a contentious coal war. By the next year, the strike was over and Alfonso, wife Angela Maria and the two Filippos settled in Coalburg’s Little Italy in Hubbard Township as members of the first Italian immigrant community in the Greater Youngstown area.

The story of the S.S. Erin and its passengers from Agnone is taken from an unpublished study by Joe Tucciarone and Ben Lariccia, “The Coalburg Italians: Coal, Immigration and Labor Strife in Ohio’s Mahoning Valley.”