From Indian Territory to the Mahoning Valley: A Story of Italian Immigration 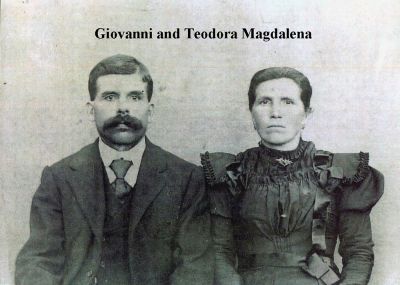 In the 1880s, what would become Oklahoma was the first destination of many immigrants from northern and southern Italy. One day, some of them would resettle in the Mahoning Valley.

Before there was Oklahoma, there were the Indian Territories. Beginning in 1831, Native Americans southeast of the Mississippi River were forcibly removed from their ancestral lands in a tragedy known as the Trail of Tears. The Federal government, the initiator of the action, relocated the exiled tribes to a large, mostly uninhabited region in the central U.S. designated as the Indian Territories. With the arrival of increasing numbers of white settlers, Congress gradually ceded tribal lands for the purpose of establishing new states.

The Indian Territory, roughly the eastern portion of the future Oklahoma, held rich mineral deposits. Coal mining there attracted European immigrants eager to take advantage of the relatively high wage of $2.50 a day. In fact, the high wages paid to miners made it such a popular destination for Italians that Mediterranean steamship companies set up offices in McAlester, one of the towns in the mining district.

The coal mines in Indian Territory were known for their use of contract labor in repayment of debt. Italians wishing to flee Italy’s economic hardships initially had no contacts in the United States, avenues to secure jobs or transportation to worksites. So, they sought the services of contractors. Immigrants entered the system, known colloquially as the padrone or boss system, at two points. Before embarking, poor Italians secured their Atlantic passage in the form of a loan from a creditor. Or often the relationship between laborer and contractor was forged right after the immigrant’s arrival in the U.S. In either case, the workers were under the control of the creditor boss or his designate who assigned them to labor gangs often in the mines or in railroad construction. Steamship lines and banks in Italian immigrant settlements operated as employment offices that funneled unemployed new arrivals into the padrone system. Italians, enrolled as contract laborers, often worked to pay off their debts in semi-servitude.

With no state government to enact workplace regulations, Indian Territory mines were notorious for their dangerous working conditions. In fact, miners there died at twice the rate as those employed in the rest of the country’s mines. This was particularly true of Krebs in the Choctaw Nation, today known as Oklahoma’s Little Italy, where Italian immigrants numbered in the thousands and where they worked on their knees in the town’s bituminous coal mines. January 7, 1892 marks the worst Indian Territory mining disaster when an explosion at the Krebs mine killed 100 coal miners and injured 200. Italian immigrants figured among the casualties.
Several families in the Mahoning Valley can trace their roots to towns in Abruzzi-Molise and then to coal mine camps in Indian Territory. Among these are the Magdalenas (Madelines), Di Giacomos (Jackamos) and Catalines. In several cases, families who had settled in Ohio relocated to the mining towns of Indian Territory or later when the area became part of Oklahoma. Then, they returned to Ohio one last time. The fact that both Ohio and Oklahoma were home to immigrants born in Carovilli, Agnone and Castilgione would account for the back and forth between the two areas.

Recent genealogical studies connect the Trumbull County coal camp of Coalburg to the first Italian settlement in the Mahoning Valley in 1873. It comes with some surprise to know that Italians also labored as coal miners just a year later in the west and that from there a few families later made their way to Youngstown, Hubbard and Akron. Our ancestors’ stories never fail to enlighten us about Italy and the United States.

The Pittsburg County Genealogical and Historical Society is a resource for Italian Immigration to Indian Territory and Oklahoma, on the web at www.pittsburgcogenealogical.org and on Facebook.

Tweet
More in this category: « Newspaper Clip Brings to Life 1912 World of Youngstown Immigrants The Mahoning Valley Loses a Loyal Son with the Passing of Tony Lariccia »