Morra!!! Alive and Well in The Mahoning Valley 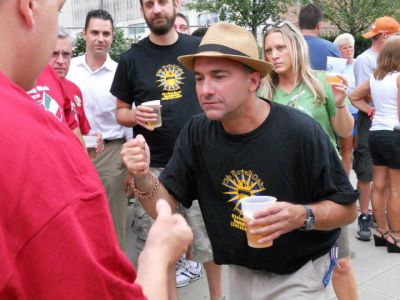 Two opponents face off, backs bent and adrenaline on overtime. Fingers and arms are flashing. A huddle of onlookers develops. Where are we? It’s any place where Morra, the thousands-year-old finger competition, is played. If you think the game disappeared when your last relative with an accent passed away, think again. This most ancient of games is thriving in the Mahoning Valley as new players catch the Morra fever.

The earliest records reveal that the game was played in Ancient Rome and Greece. Then the Romans spread Morra wherever their soldiers expanded Roman control. In addition to Italy, you can find players in Spain, France, Corsica, Portugal, Cyprus, Croatia, and Malta, all former provinces of the Roman Empire. If you had an immigrant grandfather who played (the game was played almost exclusively by men) you probably remember that almost every match was a crowd-drawing event.

While there are local varieties, the basic rules are easy to understand. There are two players. Each flashes one to five fingers on one hand, while he shouts out in Italian the total of the two hands, his and his opponent’s. If the guess is ten, he shouts morra! The winner is the player who correctly guesses the total of the two hands.
Ernie Di Renzo, who grew up on Youngstown’s Lower West Side across the Mahoning River from Brier Hill, has vivid memories of Morra. Relatives and neighbors played Morra in the driveway, next to his family’s residence on Elberen St. It was always a high-spirited game. Di Renzo recalls, “The guys would, at times, draw out the pronunciation of the numbers as they spoke them. Other times a number was said very quickly. Players had to use a lot of psychology to win.”

But Morra doesn’t exist solely in memories. Thirty-five years ago, in an effort to save the game from disappearing, Frank Corso and Bernie Tunno, President and Recording Secretary of the Youngstown Morra League, began organizing competitions. Thanks to their efforts, the League has created a renewed interest and participation in the sport. Tournaments are held on the first Tuesday of the month, eight months of the year, at the Georgetown Banquet Hall at 5945 South Ave., in Boardman.

According to Corso, the League draws players from all around the area, even from as far away as Cleveland and Midland, PA. Some are third and fourth generation players, while others join after having learned the game at a local church or Italian festival. At the present time, the League boasts a roster of 24 teams organized into 4 divisions, many supported by local businesses. “We’re always looking for new players,” says Corso.

The persistence of Italian past times never fails to astonish. Card games such as Scopa and Briscola endure on U.S. soil more than a century after our immigrant ancestors brought them here. Sports such as Bocce are not just making comebacks, they’re attracting players and fans far beyond the Little Italys of our past. It’s the same with Morra. Once played only by members of the area’s Italian communities, today’s players come from a wide diversity of ethnic backgrounds. The most encouraging sign of all? There are many young adult players.