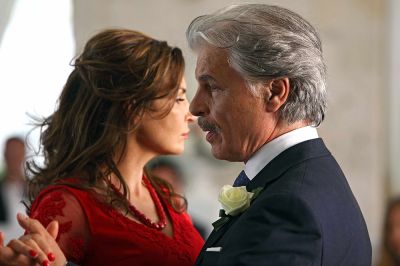 “Cooking is like love. It should be entered into with abandon or not at all.” On Sunday, Sept. 10, 2017 at 2 p.m., acclaimed chef Dante Boccuzzi will be kicking off the Cleveland Italian Film Festival creating a special menu of Italian cuisine from the Emilia-Romagna region of Italy. $110 pp includes all wines, gratuity and tax. A portion of your reservation is tax deductible. For reservations call 216.456.8117.

The Cleveland Italian Film Festival is the first independent film festival in Northern Ohio to exclusively showcase Italian award-winning films in a professional theatre setting and has sold out every year since its inception. Our gratitude to CIFF’s sponsor, Italian Tours & Travel by Diana.

Sept. 14 – “Un difetto in famiglia” (Family Flaw) Cedar Lee Theater, 7:30 p.m.
Our gratitude to award-winning Italian Director Alberto Simone and Luca Milano of RAI Fiction for making it possible to present this acclaimed, beautifully directed, poignant comedy to our festival. Filmed in picturesque southern Italy, it brings together two of Italy’s greatest comedic actors: Nino Manfredi and Lino Banfi.
Nicolo is the happiest man in the world; his daughter Chiara is set to marry the son of a wealthy general. But, on the day of the lush, opulent wedding, his 103-year-old mother, Rosa, passes away which brings the return of Nicolo’s “eccentric” brother, Francesco, creating an awkward family reunion. The two polar opposites see each other for the first time in 40 years after Francesco revealed his sexual orientation resulting in a town scandal that forced Nicolo and his mother to flee their hometown. The brothers’ touching road trip through the countryside to bury their mother forces them to confront family secrets, learn to love one another again and discover the true meaning of family. Music by award-winning composer Ennio Morricone. (Cinema Paradiso).
Director: Alberto Simone. Writers: Alberto Simone and Silvia Napolitano. Production Co.: RAI Fiction. Starring: Nino Manfredi, Lino Banfi, Carlo Cascone, Elenora D’Urso, Simone Corrente, Jane Ashbourne, Adolfo Margiotta.

Sept. 21 – “Ma che bella sorpresa” (What a Beautiful Surprise) Cedar Lee Theater, 7:30 p.m.
Guido, a romantic Neapolitan professor, is in love with love - until his world comes crashing down when the woman he loves leaves him for another man. His life seems pointless as he retreats into a world of his own. Enter Silvia, the perfect woman who loves soccer, bike rides, sunsets, and who walks around the house in lingerie. Is Guido living in reality or make believe?
Meanwhile, Guido is oblivious to the beautiful widow next door who has her eye on him. A former student of Guido tries to help him get his life back on track convincing his perplexed parents to move to Naples to be closer to him. Filmed in Naples, this film is a delightful romantic comedy filled with Italian humor!
Director: Alessandro Genovesi Starring: Claudio Bisio, Valentina Lodovini, Anna Ammirati, Chiara Baschetti, Franco Pinelli, Renato Pozzetto, Ornella Vanoni, Galatea Ranzi, Alessandro Genovesi.

Sept. 28 – “Io Che Amo solo Te” (I Love Only You) Atlas Cinemas Eastgate, 7:30 p.m. Pre-film dinner at Arrabiata’s Restaurant, 5:30-7:00 p.m.
Do we always marry the person we fall in love with? In this touching story, Ninella and Don Mimi once shared “un grande amore,” but never married due to her being rejected by his rich and influential family. Don Mimi had to settle for Matilde, a dry, difficult woman of another powerful family in town. Destiny sweeps in when Ninella’s daughter and Don Mimi’s son fall madly in love. This romantic comedy about love that never dies takes you to Puglia and a peek into the beautiful traditions of southern Italy.
Director: Marco Ponti. Starring: Riccardo Scamarcio, Laura Chiatti, Michele Placido, Maria Pia Calzone, Antonella Attili, Luciana Littizzetto, Eve Riccobono.

Oct. 5 - “Una Piccola Imprese Meridionale” (A Small Southern Enterprise) Capitol Theater, 7:30 p.m. Pre-film dinner at Local West, 5:30-7:00 p.m.
This delightful Italian comedy opens with Mamma Stella who is hoping to avoid a scandal and keep prying eyes in her town from discovering her son was disrobed from the priesthood. She is afraid to be the talk of the village so she convinces her son to move into an abandoned lighthouse belonging to the family. But Stella also has a second scandal to face: her daughter Rosa Maria has left her husband, Arturo, and run off with a mysterious lover!
The old lighthouse should bring her son some solace, but instead, it becomes a “magnet” for more characters and a kind of shelter for sinners: Magnolia, a retired call girl; Arturo, her daughter’s estranged husband; Valbona, a lesbian; and Rosa Maria herself. What could go wrong? A delightful Italian comedy!
Director: Rocco Papaleo. Starring: Barbora Bobulova, Riccardo Scamarcio, Rocco Papaleo, Giorgio Colangeli, Giuliana Lojodice, Giovanni Esposito, Mela Esposito.

Tweet
More in this category: « Opera in the Italian Garden 2017 Italians Entertain at Cleveland's Feast of the Assumption »