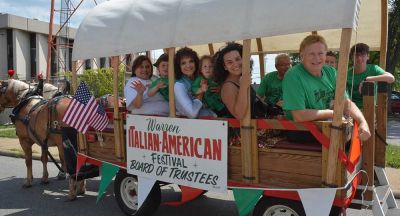 This year marks the 33rd anniversary of the Warren Italian American Festival in downtown Warren on the Courthouse Square. The four-day celebration will be active from August 10 through the 13 and the hours will span the entire afternoon. Decorated with the flags of the 20 Italian regions, this festival celebrates both Italian heritage and the Italian American community in Warren.

The Warren festival will feature both Italian-themed entertainment and a way to explore one's own Italian American heritage by taking part in festivities, games and more. Some activities include a spaghetti sauce contest as well as a homemade wine tasting on Saturday morning. This contest often results in nearly 140 bottles being entered at only $6 per bottle.

The Warren Italian American festivals began in 1985 by founder Lou Metter, who had previously been to other festivals and decided that it was time for Warren to have one of its own. "And 33 years later, we're still in existence and we're still running strong," says the festival's vice president Phil Sidoti.

The culturally-rich area displays flags from all over Italy, and it features tournaments, entertainment, beer tents, bands, and dance floors. This year will feature many musicians such as DJ Tom Angelo and the Jim Frank Trio. Outdoor mass will be held on Sunday at 9:30 a.m., and the service will be in Italian. Afterwards, there will be a continental breakfast and a large parade will follow at 2 p.m.

A grand aspect of the festival includes a $1,000 scholarship giveaway to 10 students who are entered into a 4-year undergraduate program. This is just one of many charity events that the festival has held. The Warren Italian American festival has contributed to the community several times in the past, including donations to Relay for Life, Make A Wish, Warren Rescue Mission, and Harriet's Cupboard.

Although the festival is free to enter and run by a nonprofit organization of volunteers, $3 donations are encouraged at the entrance to keep the festival up and running for many more years.

"Kids don't know about their Italian heritage," says Phil Sidoti about the current generation. "So we'd like to keep this going. We're putting culture into their minds so they know what our ancestors have been through, how they got here, and what the Italians have brought to the U.S." With many contests, activities and musicians available during this time, this festival is truly the way to get in touch with one's own Italian American heritage.