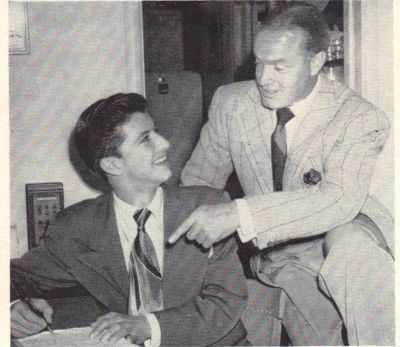 They called him the “East Side Baritone.” William Angelo Fiorelli was just a teenager when his melodious voice developed and he sang wherever he could in his home town of Cleveland. The son of Charles and Grace Fiorelli, immigrants from Campobasso, Italy, Billy was born and raised in Cleveland’s Little Italy on East 120th Street.

Fiorelli sang regularly in the Holy Rosary Church choir. He became known as the “singing pin boy” for belting tunes while working at a local bowling alley. His first paid gig was at Moe’s Main Street Club on Euclid Avenue. Fiorelli soon took his show on the road and performed at clubs, theatres and other venues in nearby cities exposing his talent to a wider audience.

It was during during a performance at the Chez Amie in Buffalo, NY, in 1948 that Hope found Fiorelli – BOB Hope, that is! Hope was highly impressed by 19-year-old Fiorelli’s rich voice and asked him to appear on his show, changing his name to Billy Farrell. Two weeks later, Billy Farrell was whisked off to Hollywood where his singing career quickly took off.

Billy Farrell joined Bob Hope’s radio show along with Doris Day, Les Brown and many others. During Christmas of 1948, he accompanied Hope and his entourage to Berlin, Germany to entertain the troops during the Berlin Airlift. In 1949, Farrell returned to Cleveland to perform with the group at The Arena.
MGM records signed Billy Farrell and his recordings topped the charts. Some of his hits from the early 1950s include “You’ve Changed,” “Circus,” “Blue Velvet,” and “It Isn’t Fair.” Farrell also had his own TV show out of Chicago and frequently appeared at top clubs around the country. Never forgetting his family and friends in Little Italy, he performed a benefit concert for Holy Rosary Church’s building fund in the church hall in 1950.

As the popularity of “crooner” music waned, so did Billy Farrell’s career. Even though he lost top billing, he continued to perform for over 60 years. Billy Farrell “Fiorelli” passed away in California in 2007.

Billy Farrell’s story is one that is preserved in the Little Italy Historical Museum collection which became a part of the WRHS Italian American Collection in 2007. This past September, the Cleveland History Center opened the exhibit “Bob Hope: An American Treasure.” Reviewing Hope’s life prompted me to share this story about Fiorelli.

The Little Italy Historical Museum Records and Photographs are cataloged at the WRHS Cleveland History Center Library as MS 5353 and can be viewed at the Library upon request.

“Bob Hope: An American Treasure” was developed by the World Golf Hall of Fame and Museum and will be on view at the WRHS Cleveland History Center in University Circle until June 30, 2017.