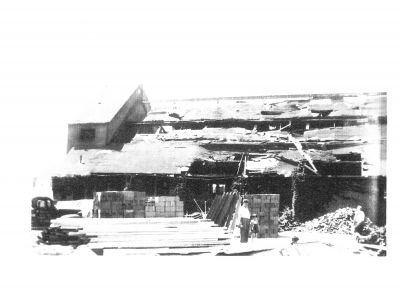 Note:  Parts of this story were written by Daniel LaVigne from his personal recollections. It includes excerpts from articles in the Universe Bulletin and Cleveland News. Story edited by Pamela Dorazio Dean.
“As a kid of six-years-old and living on Mount Overlook Ave. behind Our Lady of Mount Carmel Church (located in Cleveland at Mount Carmel Rd. and Notre Dame Ave.), I had a clear view of the back of the church. On Monday, June 13, 1949, my Nonna got up early and started baking rolls to be blessed by the priest in honor of St. Anthony. Then, she proceeded to get my sister and me up and ready to attend mass and walk in the procession. After we got home from church, it was late afternoon and we were playing outside. All of a sudden, we heard the breaking of glass and saw huge amounts of smoke coming out of the windows of the church! Below describes the true story of what happened on that sad, special day in the history of Our Lady of Mount Carmel – East.”  Daniel LaVigne

Father William O’Donnell, pastor, happened to be in Baltimore the day of the fire. Father Louis Trivison and Father Thomas Corrigan, assistant pastors, were in charge. Father Trivison explained that workmen building the new OLMC School noticed smoke coming from the ten-year-old church. They ran to the church and saw a small fire in the area around the statue of St. Anthony. They dashed out for a garden

hose and in the few moments until their return, the church interior became enveloped in flames which were quickly spread by strong winds.
Screams from the neighborhood kids aroused Mrs. Louis Santelli, the parish housekeeper, who called the Fire Department at 2:23p.m. A total of 10 fire engines, three hook and ladder companies and a rescue squad responded after Fire Chief Elmer M. Cain issued a general call. The only unusual piece of evidence uncovered by investigators was straw lying on the floor of the church at least 100 feet from the statue, but they did not feel this was sufficient evidence to indicate arson. Straw of another type used to stuff the body of a statue was found at the side of the sanctuary.
Fire department investigators and parish priests reported the fire was probably caused by “too much heat generated by the candles” of the approximately 100 vigil lights burning before the statue of St. Anthony. The statue had been removed from the sanctuary to the foot of the communion railing in celebration of the Feast Day. The flames destroyed the entire interior of the church as well as part of the east wall and the entire roof.

Despite their shock, the parishioners pushed forward in their devotion and the evening of the fire they erected a large tent opposite the church, built a temporary altar and railing and brought a charred candelabra and candles from the smoldering church. Father Corrigan led the solemn novena to St. Anthony and was celebrant of the Benediction in wet, scorched vestments rescued from the sacristy. He told his listeners not to be discouraged: “Our church began in a tent, and now we’re starting anew in another tent.” Father Corrigan also removed the altar stone and saint’s relics and found the Blessed Sacrament intact within the smoke-grimed fireproof tabernacle.

After a careful survey by contractors, Father Corrigan estimated that the total cost of rebuilding might reach $173,000, but hoped it would be less. Valuable statues imported from Italy, including a unique figure of St. John the Baptist, as well as several sacred vessels and vestments stored in the sacristy and all pews were ruined. Sunday masses were offered in the auditorium of Anthony Wayne School at the corner of East Blvd. and Woodland Ave. and daily masses in the Convent of the Most Holy Trinity Sisters at 2438 Mapleside Rd.
Work continued on the building of the school and a separate crew began church building repairs. The parishioners gave what they could of their money, time and talent to help with the repairs. Bishop Edward F. Hoban dedicated the new church and the completed school on October 27, 1950.

View the embedded image gallery online at:
https://www.lagazzettaitaliana.com/local-news/8172-our-lady-of-mount-carmel-church-east-the-fire-of-june-13-1949#sigProId72a49eb12f
Tweet
More in this category: « Roll out the bocce & feast good times Author to Speak about Relationship of Italian American Fathers and Daughters at IAWN Event »