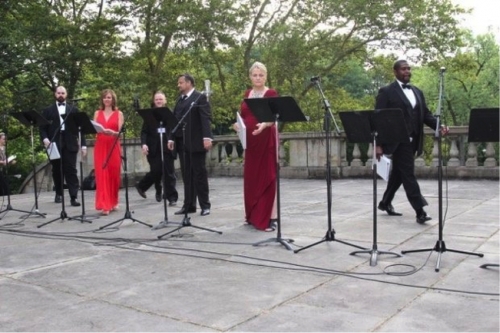 “Opera in the Italian Garden,” the popular, free concert held annually on the lawn of the beautiful Renaissance Italian Cultural Garden in Cleveland, OH celebrated its ninth successful year this summer. On Sunday, July 31, famous music from well-known operas permeated the gardens while patrons enjoyed freshly cooked, wood-fired pizzas and wine tastings. New this year was the debut of the Cleveland Ballet in the Italian Cultural Garden. Joyce Mariani, Director of the garden, presenter of the annual event and frequent contributor to La Gazzetta Italiana was recently interviewed by Zachary Lewis of the Plain Dealer. The article first appeared on www.cleveland.com on July 25, 2016. La Gazzetta offers special thanks to Mr. Lewis and the Plain Dealer for allowing the re-print of the article, and a special congratulations to Joyce Mariani on another amazing event.
The notion struck her as crazy initially. No one, thought Joyce Mariani, would be interested in live opera at the Italian Cultural Garden.
How wrong she was. Not only did the event attract more people than she expected. It went on to grow exponentially. Today, eight years later, its crowds number in the thousands.
"It just keeps getting larger," said Mariani, director of the garden and presenter of the now-annual event, this year taking place Sunday, July 31, and featuring singers and other artists with Opera Circle. "It's starting to infiltrate the lower level [of the garden]."
The attraction, of course, is that live opera is an upper. Especially when presented outdoors, in the leafy green setting of a lavish cultural garden with a grand Renaissance-style fountain.
Add to that the musical menu, arias and other vocal highlights from Italian operas, and you have a combination Mariani said many people can't resist.
"I think people love the natural ambiance," she explained. "They seem to like to lose themselves."
The music tends to be deliberately easy to embrace. The cultural garden is a not a place for musical experimentation or the avant-garde but rather for the tried-and-true, for established common denominators. It's still summer, too, a time for the light and easy.
The full lineup is far too expansive to list here. Suffice to say the program consists of selections from, among other core operas, "La Traviata," "Rigoletto," "Cosi Fan Tutte," "I Pagliacci," and "La Boheme." The performers will be singers and pianists with Opera Circle, including a trained 10-year-old Mariani said is slated to sing a piece by Rossini.
"We try to make choices that we're sure will appeal to everyone," said Mariani, adding that the garden considers both beginner and expert listeners in the process. "We try to please both camps. I listen to what the people want."
One exception this year is the inclusion of dance. Where, in the past, Opera in the Italian Garden has been a strictly musical event, not counting the culinary element (available gelato and wood-fired pizza), the 2016 edition is broader, entailing performances by members of the new Cleveland Ballet, recently seen in a fresh version of "Coppelia."
"I think ballet is another art form that will go beautifully together [with music]," Mariani observed.
That Opera in the Italian Garden continues and thrives is a testament to initiative both public and private.
On the one hand, there's the Italian Cultural Garden Foundation, whose goal is to share Italian culture and the arts in general with Cleveland.
On the other, there's Mariani herself. Even if the garden weren't officially dedicated to spreading love for outdoor opera, she would be. Never mind that she doubted the concept at first.
"I love to give beauty to people," Mariani said. That's just who I am."