The Legacy of Two Remarkable Men 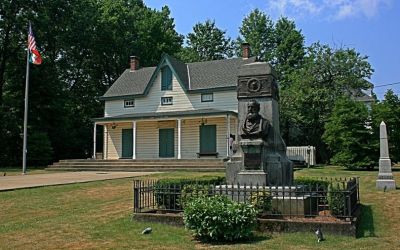 In the early 1850s, a cottage in Staten Island, NY, became the home of an inventor and a revolutionist. Both born on Italian soil, one lived in the house, the other was a guest. Collectively, their accomplishments ranged from creator to warrior. After working together for several years, each continued his own path to fulfill a dream.

In 2002, the U. S. House of Representatives officially confirmed “that the life and achievements of Antonio Meucci should be recognized, and his work in the invention of the telephone should be acknowledged.” Born in Florence in 1808, Meucci was educated in the sciences, becoming a technician and mechanical engineer. His work in the operation of transmitting sound in theaters led him to design a wire-based device for speaking and hearing from a distance.

Meucci and his wife moved from Florence to Cuba in 1835. Both worked behind the stage, and Meucci continued his work in sound equipment and on his “teletrofono.” In 1850, they moved to the U.S. and settled in Staten Island. In America, Meucci founded a candle factory that helped to support his work on the teletrofono and to communicate with his wife – bedridden by arthritis – they used a prototype of his invention.

A year later, Giuseppe Garibaldi arrived in Staten Island; and through the Italian community, he met Meucci. Garibaldi, born in 1807 to a Ligurian family of trade merchants in Nice during French rule, received a well-rounded education, but took to the sea early in life. First, as a sailor and later as a merchant marine captain. During his travels, he became involved with a group of advocates for a united Italy and in 1834, joined in an unsuccessful plot attempting to start a revolution. Avoiding execution he fled, eventually traveling to South America.

In Brazil, he formed the Italian Legion and led the way in gaining independence for Uruguay. In the early 1840s, as news of his heroism swept through Europe, Garibaldi married and settled in Uruguay’s largest city, Montevideo. In 1848, Garibaldi returned to Italy, joined by his wife. He participated in several battles for Italian unification, but none took hold; and during the attempted coups, his pregnant wife died.

With numerous regimes searching for Garibaldi, he left Italy again, arriving in New York in 1850. He stayed with Meucci for several years, working in the candle factory and partnering with Meucci to open the Garibaldi & Meucci Clifton Brewery in 1851. The brewery closed in 1853 and passed through several owners to become the Bachmann-Bechtel Brewing Co. in 1907.

After Garibaldi returned to Italy, a series of unfortunate incidents caused Meucci to miss the deadline for filing the appropriate paperwork for a teletrofono patent. Instead, Alexander Graham Bell was issued a patent. A court action was started by Meucci, but he died in 1889, before the trial ended.

Garibaldi succeeded in his dream of a united Italy. In 1860, he led his “Red Shirts” through Sicily and north to Naples, handing over control of Southern Italy to Victor Emmanuel II. In 1871, Rome became the capital city of a unified Italy and Garibaldi had been a leader in the fight for independence. Garibaldi retired to Caprera (Sardegna) and died there in 1882.

To commemorate Garibaldi’s life in America, a committee formed and in 1884, placed a plaque above the front door of the house where both men lived. It is noted that Meucci attended the ceremony. The house was acquired by the Italian community after Meucci died, with a mission to preserve it as a memorial. In the early 1900s, the house was moved to its present location and, about a decade later, the Order Sons of Italy in America was given ownership.

Listed on the National Register of Historic Places, the house became the Garibaldi-Meucci Museum in 1956. Artifacts, collected from around the world, tell the story of each man’s life: their triumphs and their disappointments. The exhibits, many including original items, offer a detailed account of their accomplishments, displaying their contributions to both American and world history.

To learn more about the Garibaldi Meucci Museum visit www.garibaldimeuccimuseum.com.