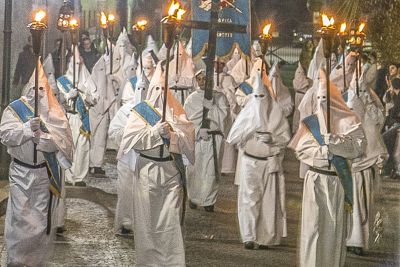 I do not mean to be irreverent, but Easter Morning strikes me as kind of an epilogue, the final concluding bit in a movie. You know, like in a movie where the villain seems to have won, to have defeated the hero. Then, the good guy comes out of nowhere, unexpectedly saving the day. That is Easter. The setup for the exciting, action-packed ending happens in the week leading up to Sunday, Holy Week.

My interest in Holy Week began when I was a kid at Saint Agnes School in Utica, NY. During Lent, they ended the school week with the Stations of the Cross. For those who may not be familiar with them, the Stations of the Cross are 14 iconic events between Jesus being condemned to death and his body being placed in the tomb. In our church, the stations were marked with 14 tableaux placed around the perimeter of the main sanctuary. All the Catholic Churches I have visited have them. I seek them out, including the chapel at the United States Air Force Academy, which has one of the most beautiful representations of the stations I have seen.

When they did the Stations of the Cross back at Saint Agnes, a priest accompanied by altar boys, two with candles and one with a processional cross, would walk down the outer aisle, stopping at each station where the priest would say a prayer. I remember the fourth station where Mary sees Jesus in his torment. Little boys do not understand the anguish a parent feels when seeing their child’s suffering. The pain that woman must have felt did not strike me until I was an adult with my own children. At the fifth station, the Romans force Simon of Cyrene to help Jesus carry the cross. I remember the priest saying in his prayer how he had wished that he could have been there to help Jesus carry that cross.

Perhaps this is why the observation of Holy Week in Sorrento has such resonance with me. Here they have two processions during Holy Week. The first of these, The White Parade, takes place on Holy Thursday, a celebration of anticipation and hope. The procession carries a statue of Mary from church to church, lights and olive branches decorating its route. While the statue is taken into each church, the rest of the entourage waits outside, silently standing in vigil. This procession symbolizes the Madonna, Mary, searching through the city for her son.

The second procession takes place on Good Friday. It is the Procession of Death, the Black Parade. This procession is a funeral march with the crown of thorns and macabre images of Christ’s broken body. Mary, as well as the participants in the parade, is dressed in black, replacing her traditional blue robes. Her son’s death has crushed Mary’s hope from the previous evening. This is Good Friday, a day when Christians confront the suffering on the cross, which was the payment for our sins. It was the day when death was seemingly victorious.

The White and Black parades go back as far as 1300 when brothers from monastic orders would walk the route with lighted lamps. In the early 19th century, however, there were so few members of these orders that the King of Naples asked the men of Sorrento to participate. Since then, the tradition has been handed down from father to son.

Whether we are discussing processions through Sorrento or the Stations of the Cross, these are examples of traditions that have permeated our culture, our way of life, for centuries. They are the things that bind us together. Of course, there are Italians and Italian Americans who are not Catholic or even Christian, but they are members of our Italian family all the same. So, as we approach this upcoming holiday, let us embrace and celebrate all the traditions of our big Italian family so that we too can pass on our culture to future generations.

Tweet
More in this category: « Guardian Angels How Grandma’s Letters Became an Archive »